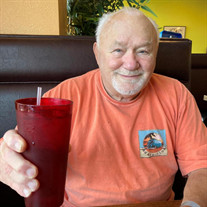 After years of near misses including various health issues, hospital stays and accidents, that he always fought to survive, by the grace of God and with no pain or struggle, Mike gently and peacefully passed into the loving hands of Jesus on the morning of October 7th. Mike was born in Detroit Michigan in 1945. He and his sister Gail were raised by their mom Connie. Life was tough for this small family (housing project and food stamps). He often told the story of how it was because of the Salvation Army that his family had the means to celebrate Thanksgiving, Christmas and even summer camp. Mike life was full of adventures, twists and turns, love, friendships and MANY hobbies and collections. But his greatest joy and fulfillment came from his deep faith in Jesus and his love for his family. He was ever present in his kids lives, attending every sporting event, talent show, concert, living room lip sync show and more. He loved getting as much time with his kids as possible – helping as a youth group leader, choir tour bus driver and taking his kids out of school to accompany him on business trips. He was the fun and sometimes crazy dad in town. Just a snippet of the many adventures with his kids including fishing and camping trips with his son, setting treasure hunts on the Oregon Coast for his daughter, taking the kids to the “Red Zone” on Mt Saint Helens weeks before the eruption, canoe rides in Puget Sound during rainstorms, many road trips in old cars which always included befriending mechanics along the way. There was no shortage of adventure with Mike. Mike’s greatest accomplishment in his life was his 48+ year marriage to his best friend, Ann. Mike and Ann met as hippies in 1972 and were married in April of 1973. They had come from opposite backgrounds - Mike grew up with limited means, was raised by his single mother and Ann grew up comfortably with her siblings and both parents very active in her life. It was a bit of opposites attract! The first few years of marriage were spent navigating those differences and really learning how to be a husband and father without ever having had an example. It was hard work, but God was faithful. Through his faith, the influence of amazing mentors that God put into his life and a lot of hard work on both Mike and Ann’s part, not only did their marriage pass the test of time but it thrived, full of fun, laughter, adventure and love. Mike worked in the field of Cable TV for well over 30 years, holding positions from installer to management. Anyone that met him on the job would remember him and would probably have a funny Mike Byrnes story for you. Mike was a dear friend to so many, including his best friend, Bob Matthews. His adventures with his friends included motorcycle trips, often intentionally to states with no speed limit or helmet laws, hiking and mountain climbing, men’s group breakfasts and retreats, mission trips that may have included some illegal border crossing, small group meetings and dinners and most importantly just quality time spent hanging out and sharing life and faith together. He loved you all. Mike is preceded in death by his mother, Connie Hansen. Mike is survived by his wife, Ann Byrnes, his 3 children and their spouses, Michael Jr. (spouse Myra), Jenny (spouse Jason) and Katie (spouse Steven) and the 11 grandchildren that he adored and spoiled, Micah, Mya, Davicia, Davanan, Dejan, D’mari, Finnley, Presley, Campbell, Porter and Beckett, his sister Gail and her spouse Mike, his beloved sisters-in-law, nephews and nieces, and all his dear friends. Mike’s Celebration of Life will be held on Saturday, November 6th, at 1:30 PM, at Harper Evangelical Church, 10384 SE Sedgewick Rd, Port Orchard WA. In lieu of flowers consider making a donation to the organization the helped Mike so much in his childhood, The Salvation Army. To protect some of our more vulnerable family and friends we ask that attendees be vaccinated and wear masks. The service will also be available online at https://www.youtube.com/c/HarperChurch

After years of near misses including various health issues, hospital stays and accidents, that he always fought to survive, by the grace of God and with no pain or struggle, Mike gently and peacefully passed into the loving hands of Jesus on... View Obituary & Service Information

The family of Michael Louis Byrnes created this Life Tributes page to make it easy to share your memories.

After years of near misses including various health issues, hospital...