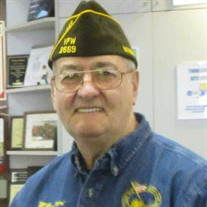 Michael (Mike) R. Licari was born 69 years ago in Brooklyn, New York. He passed away peacefully at Harrison Medical surrounded by his family on May 01, 2018. The eldest of eight children born to Valentino and Betty (Goldstein) Licari, Michael grew up in Jamaica Queens, NY where he attended school and was heavily involved in baseball and basketball. He elected to postpone his entry into St. Johns University to enlist in the US Army and serve his country in Viet Nam from 1968-69 and 1970-71. A member of G Company 75th Airborne Ranger Regiment Mr. Licari went on to honor his fellow comrades by dedicating his time and service through the Veterans of Foreign War (VFW Post #2669 – Port Orchard, WA). Michael is survived by his wife Michelle (McOmber) of 25 years, two sons Michael G. Licari (MyLady) (Orlando, FL) and Christopher A. Licari (Kelly) (Setauket, NY) and five grandchildren who were the joy of his life. He is also survived by two stepchildren Jeremiah J. (Tracie) LeBlanc (Poulsbo, WA) and Rikki L. LeBlanc (Port Orchard, WA). Michael’s surviving siblings are Valerie Licari McIntyre (Auburn, NY), Maria “Theresa” Licari Bretschneider and Dennis Licari-Folino both of Syracuse, NY. Proceeding him in death were his mother Betty (2015) and father Val (2017) along with three brothers Vito (1999), Dominick (2001), and Steven (2007). Enjoying family and friends was Mike’s idea of a good time. He shared memories of his early days of times spent with his siblings on family outings and working on cars and racing with his father in Freeport Long Island. He continued to be passionate about racing, especially NASCAR, “way to go Jeff Gordon” and spent many hours watching his favorite pastime on Sunday afternoons. Another passion of Mike’s was bowling, and he was most proud of his perfect 300 game on NOV. 10, 2003 @ Hi Joy Bowl in Port Orchard. Bowling even played a role in Mike and Michelle meeting in 1990 in Fort Lauderdale, FL, now that’s a funny story. Moving cross-country to Western Washington in 1995 settling in Port Orchard Michael and his family became active in the community. You could often find him helping a friend repair a car or boat motor. He loved the water enjoying time fishing and crabbing but, he LOVED camping. In recent years many wonderful adventures were had exploring State Parks outside of Kitsap County. Mike’s GREATEST passion, besides his family, was his time and dedication to helping others through his involvement with the VFW. Creating an annual fundraiser (2011-17), Bowling for Veterans, benefitting local Veteran families providing holiday meals and blessing their children with gifts at Christmas, this brought him much joy. Mike was recently elected VFW Post #2669 Commander yet passed before being sworn into office. We are certain that his legacy of service will live on. Michael’s life and service to his country will be honored by his burial at Tahoma National Cemetery in Kent, WA on Friday, June 29th @ 12:30pm. A Celebration of Life will be held at Fred Needham VFW Post #2669 Port Orchard, WA Saturday, June 30th beginning at 3pm.

Michael (Mike) R. Licari was born 69 years ago in Brooklyn, New York. He passed away peacefully at Harrison Medical surrounded by his family on May 01, 2018. The eldest of eight children born to Valentino and Betty (Goldstein) Licari, Michael... View Obituary & Service Information

The family of Michael Robert Licari created this Life Tributes page to make it easy to share your memories.