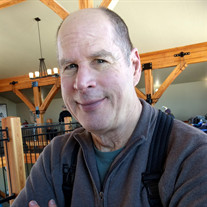 Marine, Husband, Daddy, Papa. Early in the morning on Thursday, November 7th, Mike McInnis passed away in his sleep. He was three days shy of turning 68. Born November 10th, 1951, Mike shared his birthday with the United States Marine Corps. He was born in Seattle, Washington, grew up in Alderwood Manor, and shortly after his graduation from Meadowdale High School, he joined the Marines. He was in the service for eight years, but once a Marine, always a Marine. He would always stop and shake the hands of fellow Marines, having long conversations with them, sometimes to the chagrin of whoever was out and about with him. In June 1981, his cousin introduced him to Mary Van Hise. Three weeks later they were engaged, less than a year later they married, and for 37 years their marriage provided the solid foundation and example for their children to model their lives upon. In 1990, his first daughter Karen was born. Her birth being so close to Christmas, and him being such a new dad, he signed his first Christmas gift to her as “To Karen, from Mike.” That was the start of a long tradition of dad jokes. For 35 years, Mike worked as a wireless communications engineer at Boeing. He took pride in his work, and was always inventing things that he submitted for Boeing patents. No matter what his family said, they could not get him to retire. He loved his job so much. He was the best dad in the world. He put up with a household full of women—including all the animals! He had the patience of a saint, and never raised his voice in anger. He went skiing with his younger daughter Colleen every winter, volunteered at Panther Day Camp (for type 1 diabetics) for nearly 20 years, and was always up for treating his older daughter Karen to the latest and greatest action movies. He and Karen loved the same books, and frequently traded copies or gave each other recommendations. In September 2012, Mike became a grandfather. This, after so many years, was the role he was born for. He became Papa—the man, the myth, the legend. Projects around the house languished in favor of spending every possible second with Rylee, the apple of his eye. She had him wrapped around her tiny little fingers the moment she was born. Papa was her favorite person, and he would do anything Rylee asked. The night before his passing, Rylee was playing “school” with him and assigned him some homework. When grading it, she gave him a big fat F. Papa took a pen and changed his grade to an A, and Rylee was so mad! Another piece of homework later, though, she gave him an A+ on her own. Papa would always play with her, and often made up new games to entertain her. When his daughter Colleen was in elementary school, she would come home and recite her Bible memory work to him. The persistence paid off, and on October 6th, 2002, Mike McInnis was baptized into the saving grace of Jesus Christ. That knowledge brings his survivors an abundant measure of comfort in this chaos of unwanted grief and pain. He is gone too soon for our human hearts to understand. Our comfort comes from knowing he has Eternal Life in the arms of Jesus Christ. It’s just a matter of time before we see, kiss, and hug him again. “For me to live is Christ, and to die is gain.” — Philippians 1:21 Mike is preceded in death by his parents Paul and Albena, newly discovered older brother Richard, aunt Millie, and uncle Russ. Mike is survived by his wife Mary, daughters Karen and Colleen, granddaughter Rylee, brothers Jerry and Dennis, sister Shelley, and many nieces and nephews. His interment will take place at Tahoma National Cemetery in Kent, WA, at 9:30 AM on November 20th. A memorial service and reception will follow at 1:00 PM at Bethany Lutheran Church in Port Orchard.

The family of Michael Dominic McInnis created this Life Tributes page to make it easy to share your memories.

Early in the morning on Thursday,...