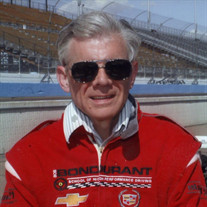 Michael Richard (Mike) Norris passed away peacefully on March 25, 2021. The only child of Richard Norris and Rose Horky Norris, Mike was born in Omaha, Nebraska on March 4, 1942. The son of a railroad engineer, Mike lived in many places in his youth, including Denver, Colorado (where he was baptized at Annunciation Catholic Church) and Rawlings, Wyoming, before settling back in Omaha, where he graduated from Omaha North High School. He attended Northwestern University in Evanston, Illinois, and earned a bachelors’ degree in mechanical engineering in 1965. Upon graduation, Mike moved to Seattle, Washington, where he joined the Boeing Airplane Company as a mechanical engineer. He met his future wife, Jacquelyn (Jackie) Schille, while they were both working at Boeing, and they were married on September 19, 1969 in Seattle. In July of 1970, Mike took a position as an industrial engineer with the Puget Sound Naval Shipyard (PSNS) in Bremerton, Washington, a job that he held proudly until his retirement at the age of sixty in August 2002. The following June, Mike and Jackie moved from their home in West Seattle to the Kitsap County community of Manchester, where they lived together until his death. While at PSNS, Mike also completed his Master of Business Administration at Pacific Lutheran University in Parkland, Washington. Mike had many hobbies, including a great love of cars and the history of automobiles. For half a century he diligently maintained a 1968 Jaguar E-Type convertible sports car, only selling the car in 2014 when parts became prohibitively challenging to acquire. One of his favorite retirement memories was in March 2005, when he enrolled in the Bob Bondurant School of High Performance Driving in Chandler, Arizona, and was able to practice technique in an Indy car on a full closed course. Stemming from his youth, he was also an ardent railroad enthusiast, and a large portion of the Norris’ basement was devoted to an elaborate 1:160 (N-gauge) model railroad featuring multiple towns with a detailed mountain range separating them. He and Jackie enjoyed traveling and camping together in their recreational vehicle, frequently visiting campsites on the Olympic Peninsula, western Washington, and beyond. Their greatest journey together was through mainland Mexico including the Copper Canyon, although they also enjoyed trips to Arizona, Colorado, and other destinations. Mike was a dedicated fan of Seattle sports teams, particularly the Seattle Seahawks football team and Seattle Mariners baseball team. Mike was a devoted husband and father, and is survived by his wife of fifty-one years, Jackie; together, they had two sons: Doug Norris lives with his wife Colleen (in Golden, Colorado) with daughter Vivian and son Bruce, and Dan Norris lives with his wife Katheryn (in Prosser, Washington) with two daughters, Hannah and Elizabeth. Mike and Jackie also had a goldendoodle dog, Rusty otherwise known as Bob Barker. The family requests that in lieu of flowers, donations be made his name to a charity of your choice.

Michael Richard (Mike) Norris passed away peacefully on March 25, 2021. The only child of Richard Norris and Rose Horky Norris, Mike was born in Omaha, Nebraska on March 4, 1942. The son of a railroad engineer, Mike lived in many places in... View Obituary & Service Information

The family of Michael Richard Norris created this Life Tributes page to make it easy to share your memories.