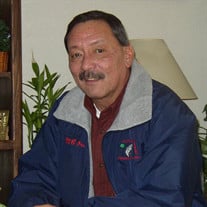 Michael Conrad Perez was born in Bremerton, Washington on October 29, 1948 and was called to Heaven by his Lord and Savior, Jesus Christ, on April 11, 2017. As 1968, South Kitsap High School graduate, Mike began to serve in the United States Navy aboard the USS Oklahoma City (CLG-5) and sailed the South China Sea between Viet Nam, the Philippines, and Japan, completing his tour of duty in October 1970. He returned to Kitsap County and took a position at the JC Penney automotive center in Bremerton. And later, a Merchant Marine for several years, which gave him an affinity for nautical rigging, and shipboard working techniques and traveling to other countries including Venezuela. He wanted to settle down so he landed a position at the Puget Sound Shipyard as a tool and parts attendant, then furthering his civilian career through promotions to various positions before retiring in 2009. With Chris, Mike's brother, he shared adventures of hiking, camping, and fishing. He was quite an outdoors man and loved the waters of Puget Sound. His summers during high school were spent working in Alaska fish canneries and saving for the following school year. While working for the Puget Sound Naval Shipyard, he chartered several fishing trips to Alaska with friends. Alaska: The Last Frontier was his favorite show. Truthfully, Alaska was Mike's Heaven on earth. Skillful hands, and the use of his Ship smith lathe/sander/drill press, he built a workshop to his own specifications. Michael was a great cook, savored salmon dipped in dad's special mixture of soy sauce and lemon juice, and grilled pork steaks or rib eyes all year around, yes, even in winter! Upon retiring, Mike loved fishing and searching for small “treasures” with his nifty metal detector. All his life, Mike was a generous, kind, and thoughtful man who loved and wanted the best for his family. He strived for peace and strong relationships. Nephews, Robby Bonus, Jesse Perez, and niece, Jamilyn Perez, as well as many lifelong friends in Port Orchard will miss his presence. Mike leaves two sisters, Linda and Maria, and one brother, Chris to celebrate his life. Special gratitude and countless thanks to his nephew, Anthony Figueras, his wife, Sarah, and their three children, Anthony Jr., Olivia, and Chris Figueras, who unceasingly provided compassionate love and care by giving their Uncle Mike the highest quality of life possible in his later years. He loved the Figueras family. When we see Michael again, don't be surprised to find him fishing, cooking adobo, having pineapple upside down cake, or chocolate chip cookies just like Olivia always baked for him. In recognition of exceptional service and support on behalf of our beloved, Michael C. Perez, you may donate to the HOSPICE in Micheal’s name. Our family will be forever grateful. At Mike's request, there will be no formal memorial service.

Michael Conrad Perez was born in Bremerton, Washington on October 29, 1948 and was called to Heaven by his Lord and Savior, Jesus Christ, on April 11, 2017. As 1968, South Kitsap High School graduate, Mike began to serve in the United... View Obituary & Service Information

The family of Michael Conrad Perez created this Life Tributes page to make it easy to share your memories.

Michael Conrad Perez was born in Bremerton, Washington on October...