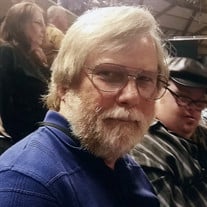 Michiael (Mike) L. Smith, born on August 11, 1954 in New Castle, Indiana, passed away at the age of 64 on May 12, 2019 in his home in Port Orchard, Washington following a decade long battle with cancer. Mike was a Marine Corporal who fought in the Vietnam War followed by a term in the Air Force Reserves. He was an employee at the Puget Sound Naval Shipyard for more than 35 years, starting as an Apprentice, going on to become a Boiler Maker, and eventually retiring as a Nuclear Inspector in January of 2010. Mike was a life-long learner with a love of history. He loved the game of chess and had an extensive chess collection, and enjoyed teaching the game to his grandson. He cherished his 2006 fire-red mustang convertible, and loved showing it off in car shows and parades. He loved to travel, play with his grandchildren, go hunting, fishing, and camping, and to hike in the woods with his loyal dog, Storm. Most of all though, he loved sports and sharing his passion for sports with the next generation of athletes. He coached Little League baseball, fastpitch softball, bowling, and just about every other sport offered through the Special Olympics. He and his wife, Wanda, were the South Kitsap Special Olympics Area Coordinators for 26 year, teaching acceptance, cooperation, competition, and teamwork to hundreds of athletes with special needs and unified partners over the years. He was honored to be the Washington State Coach of the Year, was the first and only inductee into the WA Special Olympics Hall of Fame, and was chosen to represent our state two different times at the Special Olympics National Games. Mike was preceded in death by his son Jason Smith, parents Hubert and Viola Smith, and brother Jim Smith. He is survived by his beloved wife of 44 years, Wanda Smith, his daughter Jessica Shine, her husband Darence Shine, his grandchildren Tyus and Alyse Shine, his siblings Debbie Beers, Jerry Smith, and Nancy Randall, and foster son Christian Whetstone; all of whom loved him dearly and will never forget his dedication, support, stubbornness, and most of all, his undying love for them. He will be dearly missed.

Michiael (Mike) L. Smith, born on August 11, 1954 in New Castle, Indiana, passed away at the age of 64 on May 12, 2019 in his home in Port Orchard, Washington following a decade long battle with cancer. Mike was a Marine Corporal who fought... View Obituary & Service Information

The family of Michiael Leroy Smith created this Life Tributes page to make it easy to share your memories.