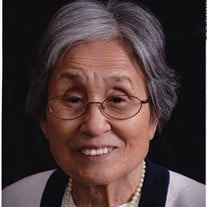 Mieko Leary (age 83), a former long term resident of Port Orchard, passed away at her home in Norton Shores Michigan on February 10th 2017. Mieko was born on January 13, 1934 in Kagoshima Prefecture Japan to Toshi and Sanebumi Okamura. She had two older brothers; Masafumi Okamura and Masatori Okamura (both deceased), two older sisters; Tomiko Kawahara and Satsuki (Masao) Yamagishi; and three younger sisters; Kinuko (Takanobu) Fukumoto, Kazuko (Hideo) Nozaki, and Aiko (Hideji) Otani. Mieko met her husband, William (Bill) Patrick Leary (deceased), a Senior Chief in the US Navy, in Yokosuka Japan. They were married on December 23, 1966. Two years later their only son Thomas, was born. After Bill retired from the Navy, the family left Japan for the US. Mieko was able to live in many places, first moving with Bill in the Navy, and then with her son Tom, his wife Jodi, and their two daughters, Tia and Alaina. Mieko lived in Las Vegas and Hawthorne Nevada, Adak Alaska, Port Orchard Washington, Pittsburgh Pennsylvania, Cleveland Ohio, Knoxville Tennessee, and finally Norton Shores Michigan. Mieko enjoyed the adventure and excitement of exploring each new city. During her time in each new location, she became active in the church and cherished the fellowship. Mieko lived a Christian life and was a long time member of the Rock of Ages Lutheran Brethren Church in Seattle. While living in and visiting Seattle, Mieko attended her beloved church, the Japanese Ministries and their Bremerton bible study. Mieko cherished the many friendships she made, and often talked about long conversations she had had with her long distance friends and with overseas family. She also loved spending time with her son, daughter-in-law, and granddaughters, and watching her granddaughters play sports. Throughout her life, she dedicated herself to helping others. While on Adak Island, she was an interpreter; providing Japanese – English translation for fishing vessels in the Bering Sea. Her love, caring and generous nature will be sorely missed. A memorial service to honor the life of Mieko Leary will be held on Saturday, March 18th at 11:00 at the Rill Chapel located at 1151 Mitchell Ave in Port Orchard, WA.

Mieko Leary (age 83), a former long term resident of Port Orchard, passed away at her home in Norton Shores Michigan on February 10th 2017. Mieko was born on January 13, 1934 in Kagoshima Prefecture Japan to Toshi and Sanebumi Okamura. She... View Obituary & Service Information

The family of Mieko Leary created this Life Tributes page to make it easy to share your memories.