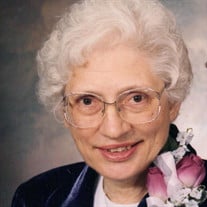 Myrtle Lorraine Cooper was born near Hazen, North Dakota, on July 15, 1929, to Andrew Oster and Florence Conrath Oster. She was baptized September 22, 1929, in the German Evangelical Lutheran Church. They spoke German until Gerald, her older brother, started school. Then Florence decided that only English would be spoken at home. The family lived with her Grandpa Conrath and Aunt Myrtle for a brief period in 1933—that’s when Myrtle became Lorraine. In 1941 they moved to the Olympia, Washington, area. While in high school, Lorraine worked in a bakery in Olympia and in the kitchen at St. Peter’s hospital. She met Merton Gene Cooper at the Pattison Lake roller skating rink. She graduated from high school that week and her cousin Erwin Wilfert and his wife came down from Seattle to help her celebrate. When Gene saw them check in at the rink he noted that Lorraine paid her own way. They enjoyed skating together and visiting. After they dated a few times, she invited him to her birthday dinner. Then in September, when the family was gathered for Florence’s birthday, Aunt Jo asked if she planned to go to college. She glanced at Gene, and the subject was dropped. He proposed that night; she said yes. Gene had purchased a ring while he was in the Navy, planning to sell it at a profit. His mom suggested he keep it, because he would need it. They had the ring sized for Lorraine’s finger and announced their engagement to the family. Gene and Lorraine were married on February 14, 1948, in Olympia. The date was chosen because it was a Saturday, but being Valentine’s Day ensured that Gene could never forget their anniversary! For a wedding present, Gene’s dad gave them Tanga, a registered Samoyed, and her puppies. They bought property west of Olympia in July 1948. It had a two-room shack with electricity, no plumbing, a wood stove for cooking, and an enclosed back porch where Lorraine had a washing machine. They hauled water from town in milk cans. In June 1949 Gene and Lorraine drove to Denver so Gene could study gunsmithing at The Colorado School of Trades on the GI Bill. Lorraine worked at a bakery for 75 cents an hour. In 1950 when the Korean War began they decided they should be home in Olympia. Gene had joined the Navy Reserves while they were in Denver and was called back to active duty. They were stationed at Keyport, WA, so their first child, Myrtle, was born in the Bremerton Naval Hospital. After getting out of the Navy, they moved back to Olympia and lived in the shack while they built a new house. Sandra was born while they lived in the shack; Robert and Carol were born after the family moved to the new house. They purchased a clothes dryer before Robert arrived—no more drying racks for diapers! Gene worked in Shelton at a plywood plant during these years. After he became an apprentice in Puget Sound Naval Shipyard in Bremerton, they sold the house and started looking for a new home. In 1961 they purchased 14 acres on Berry Lake Road in Port Orchard and built a house overlooking a small lake. They planted a large garden, including blueberry bushes started from Lorraine’s dad’s garden, and started an orchard. Lorraine joined Bethany Lutheran church. She was a Sunday School teacher and started the class for infants and toddlers. She also participated in Bible studies, the ministry to nursing homes, and the altar guild. Their neighbor on Berry Lake road took in foster children. The Coopers became acquainted with these children and decided to become a foster family also. Mike VanBuskirk joined the family in 1964 when he was five and lived with Coopers until he graduated from high school and had a job. In 1985 Gene retired from the shipyard and soon after, Lorraine and Gene began making long trips in their motorhome, visiting family and friends across the country. They began attending reunions at Farragut Naval Training Station in Idaho, where Gene went to boot camp, and ended up helping to organize the reunions and publish its newsletter. They organized firearms safety classes for women, campaigned for people running for state and local offices, and testified before legislative committees in Olympia. In 1995, Gene and Lorraine purchased property in the Creekside community and built the house they lived in until Gene died in August 2017. They had been happily married for 69 ½ years. Lorraine then moved into Stafford Suites Assisted Living in Port Orchard. After her stroke in December 2017 she lived at Orchard Pointe Memory Care Assisted Living in Port Orchard. Lorraine was preceded in death by her parents, her brother Darwin Oster, and her husband, Merton Gene Cooper. She is survived by her children, Myrtle Siefken, Sandra Cooper, Robert (wife Marilyn) Cooper, Carol Cooper and Michael VanBuskirk; her grandsons Seth Siefken and Demitri White; and her siblings Gerald Oster, Eugene Oster, Yvonne Braune and Milton Oster.

Myrtle Lorraine Cooper was born near Hazen, North Dakota, on July 15, 1929, to Andrew Oster and Florence Conrath Oster. She was baptized September 22, 1929, in the German Evangelical Lutheran Church. They spoke German until Gerald, her older... View Obituary & Service Information

The family of Myrtle Lorraine Cooper created this Life Tributes page to make it easy to share your memories.

Myrtle Lorraine Cooper was born near Hazen, North Dakota, on...