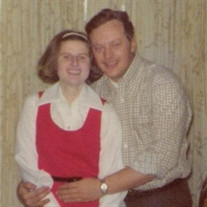 Nancy Mae Tuck was born on October 10, 1947 in Seattle, WA to Marvin Allen Tuck and Maxine Marie Shallow. Her father was a warrant officer in the Army and died during the Korean War, when she was only three years old. Her mother, who died... View Obituary & Service Information

The family of Nancy Mae Wilder created this Life Tributes page to make it easy to share your memories.