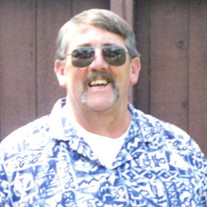 Nelson E Desormier Sr. 74, passed away at home on 12/26/18. He was born in Holyoke, Mass to Henry and Lillian Desormier (both deceased) and grew up in Hopewell Junction, New York. In 1959 he moved to Jacksonville, Florida. He worked doing brake jobs where he met his best friend John Watson. In 1962 he enlisted into the US Army, Airborne, and was stationed in Okinawa, Japan. Where he completed his time as a Private Second Class Paratrooper in 1965. He married Joyce McCraine in 1966. And they had their first son, Ed in 1967. They then moved to Vallejo, California in 1968. He worked for Mosquito Abatement District from 1968-78, this is where he acquired the nickname “Skeeter”. Nelson and Joyce had their second son, Tony in 1980. He worked miscellaneous jobs until 1983 when he started for the Department of the Navy. In 1996 he moved to Bremerton, Washington due to his job moving. In 2000, he married Marian Gray. In 2005, he retired from the Department of the Navy. He then hit the road with his faithful companion, Blue Girl for many road trips across country to visit family and friends. On Sundays, depending on the weather in the spring and summer. You could catch Nelson either watching NASCAR racing or at the Bremerton Raceways watching the Drag Races. He always had a story to tell about everything and would talk to anyone. He loved to read books about Military/War. He was always tinkering around his house; waxing his Tahoe, washing the driveway off, or getting ready for a road trip. He is one of twelve children. Two older brothers Henry and Don are both deceased. He has an older sister, Mary also deceased. He is survived by brothers: Bill, Paul, John, Tom, Robert, Joe, and Ray, and sister Mary. Sons: Ed, Tony and Daughter-in-Law Nikki. Grandchildren: Jacob and wife Tina, Damien, Cheyanne and husband Alexis, and Stephen. Great Grandchild: Liam. In lieu of flowers please consider donations to the Kitsap Humane Society (www.kitsap-humane.org)

Nelson E Desormier Sr. 74, passed away at home on 12/26/18. He was born in Holyoke, Mass to Henry and Lillian Desormier (both deceased) and grew up in Hopewell Junction, New York. In 1959 he moved to Jacksonville, Florida. He worked doing brake... View Obituary & Service Information

The family of Nelson E Desormier Sr. created this Life Tributes page to make it easy to share your memories.