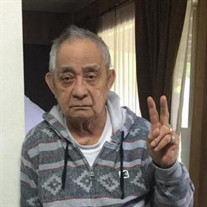 Noe B. Aragon, 86, peacefully passed away at home surrounded by his loving family on August 26, 2020 in Port Orchard, WA. Born in The Municipality of San Quintin, Province of Abra, Phillipines, September 22,1933. He is survived by his wife Remedios of Port Orchard; six children and spouses, Noemi Becker (Jerry), Noe Jr., Noeli Thomes (Joyce), Noel (Mindy), Norine Partida (Flavio), and George; seven grandchildren and nine great-grandchildren. He is also survived by sister Emma, as well as extended Aragon family and numerous nieces, nephews, and relatives. With abiding love and our deepest gratitude, he will forever remain in our hearts. Noe B. Aragon was preceded in death by his father Severo F. Aragon and mother Potenciana Basay Aragon, sisters, Elena, Eliza, Bernadette, Lea, “twin” Rosario, brothers, Severo Jr., Edgar and first-born son Renoe. Noe married his wife Remedios (Remy) on December 18, 1955 in The Municipality of Bangued, Province of Abra, Philippines and was married for nearly 65 years. Together they raised a large family, surrounded with children, grandchildren, great-grandchildren and many, many friends. Noe served in the United States Navy for 20 years as an Engineman from 1955 to 1975. He was a veteran of both Korean and Vietnam Wars. After his retirement he continued to work in the maintenance HVAC field at Providence Medical Hospital, Seattle. He owned and operated Island Appliance Repair business. He was very active in the community as a two-term president of the Filipino American community of Kitsap County. A dynamic personality and in perpetual motion, he was a small statured man but had a booming voice and a large presence which filled the space no matter where he went. Dad had a passion for cooking, gardening, fishing, making squid jigs, crocheting fishing nets. He had a love of music, singing, playing his guitar, trumpet, saxophone. Noe was well known for his traveling wok, killer jigs, and as a water buffalo cowboy. Wacky, weird, and wonderful with the most outrageous sense of humor, dry, sarcastic, and quick witted. You made us all belly laugh with all your backwards words and quotes. Noe was always willing to offer a helping hand. He enjoyed spending time with all his friends, drinking coffee, playing cards. Above all, his greatest pride and joy were his grandchildren and great-grandchildren. “We bid you farewell but never say goodbye”….you were an unabashed kaleidoscope of a character, you lived your life in a savory way, you were always the wild unpredictable center of gravity, which no one could escape the pull into your orbit, until all were captivated, leaving us Awestruck!! (Dazed & confused too)!!! You were perfectly imperfect! After you were created, God had to break your mold because the world couldn’t handle another you. You were a rule breaker and a risk taker, teetering on the edge. You did Everything with 110% of your being. Your life was an incredible odyssey full of twists and turns, cliffhangers and u-turns. You were so many things to so many people but most importantly you were true to yourself!!! You lived an abundant life, with family and friends and unbelievable experiences, we all should be so lucky.…. Thank you, Dad, for taking us on this fantastic journey, it’s been a trip!!! We will miss you!!! but now we gotta catch our breath…. Until we’re “Together Manen.”. Rest in Glory, Noe B. Aragon P.S. Hold the gate open. On September 11, 2020 a Graveside service to be held at Sunset Lane Memorial Park. Cemetery, located at the Mile Hill and Bethel Avenue Roundabout, 1000 Bethel Ave., Port Orchard, WA. 98366. A Celebration of Life Reception immediately following the committal. .

Noe B. Aragon, 86, peacefully passed away at home surrounded by his loving family on August 26, 2020 in Port Orchard, WA. Born in The Municipality of San Quintin, Province of Abra, Phillipines, September 22,1933. He is survived by his wife... View Obituary & Service Information

The family of Noe Basay Aragon created this Life Tributes page to make it easy to share your memories.

Noe B. Aragon, 86, peacefully passed away at home surrounded...