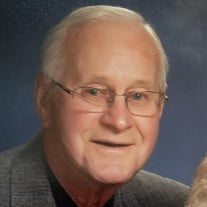 Olger “Bud” Ingulsrud, age 91, of Port Orchard Washington died peacefully March 29th 2018 at home in Gig Harbor WA. Bud was born to Ben and Amanda Ingulsrud August 29, 1926 at rural Milton, North Dakota. He married Jane Martin on July 2, 1950 in Park River North Dakota. Bud joined the Navy after graduating from high school in 1944. He served in the Pacific during WWII and was awarded the Asiatic Pacific Area Campaign Medal with 3 bronze battle stars, the Philippine Liberation Medal, and numerous other ribbons and medals. He was in Tokyo Harbor during the signing of the WWII peace treaty and served in the Occupation Force in Japan. He was re-called during the Korean War in 1951 and was awarded the Korean Service Medal with 2 bronze battle stars, United Nations Service Medal, and China Service Medal. He was awarded the Republic of Korea War Service Medal and the Republic of Korea Medallion of Gratitude from the Republic of South Korea. He was a member of First Lutheran Church in Port Orchard since 1953, serving twice as Congregation President. He was active in the senior groups at the church. In 1953 He was employed at Puget Sound Naval Shipyard and retired as Electrician General Foreman in August 1981. He spent the next 16 years with QED Systems Inc. as a Senior Engineer Technician retiring in September 1998 at the age of 72. Bud served as National President of the Kamikaze Survivors Association. He designed and developed the Kamikaze Survivor Medal for the US Navy servicemen who served during WWII. He was preceded in death by His wife of 64 years, Jane; his parents Ben and Amanda; infant sibling twins George and Anna, sisters Laura Schafer, Margaret Cummins, Bethel Cudmore, and Eleanor Fjeld; grandson Curt Ingulsrud; and great-grandson Derick Ingulsrud Jr. He is survived by sister Dorothy Axvig of Park River, ND; three sons Clark (Sharon), Warren, and Rodger Ingulsrud, all of Port Orchard; four grandchildren Lisa Ward (Robert), Chris Ingulsrud (Melissa), Eric Ingulsrud (Heather), Derick Ingulsrud; eight great-grandchildren, Austin Badertscher (Ayla), Makayla VanGesen (Ian), Savannah and Naiya Ward, Abigail and Amanda Ingulsrud, Ethan and Taylor Ingulsrud; and one great-great grandchild, Maralisa Badertscher.

The family of Olger Neil Ingulsrud created this Life Tributes page to make it easy to share your memories.