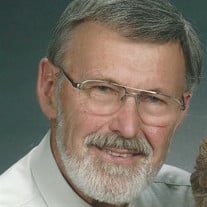 John was born March 29, 1930 in Miller, South Dakota. John died peacefully at home Monday morning May 29, 2017 with his wife at his side in Port Orchard, WA at the age of 87. John married Virginia Hokanson on June 6, 1953 in Raleigh, North Carolina and they lovingly enjoyed 64 years together. They had four children; Rebecca (Dennis) Barton of Port Orchard, WA, Charissa Hokanson of Vancouver, WA, Peter Hokanson of Tucson, AZ, and Paul (Julietta) Hokanson of Silverdale, WA. He is survived by his wife Virginia, their four children, seven grandchildren, seven great grandchildren, and his sister Evelyn Collier of Bullhead City, AZ. He is preceded in death by his father and mother Alfred and Ellen Hokanson of Salmon, ID, and his brothers Oliver and Laverne Hokanson also of Salmon, ID. John graduated from Salmon High School in 1950 before serving in the US Army as an artillery planning specialist. He met Virginia while stationed in Ft. Bragg, NC and 9 months later they were married in Raleigh, NC where they made their first home. John held various jobs until they moved to Bremerton, WA in 1954 where he started his career at Puget Sound Naval Shipyard as a ship fitter apprentice, advancing thru the trades to the position of Comptroller when he retired after 31 years. After retiring from civil service, John continued to work for several years at a local engineering firm until he fully retired, allowing him ample time to travel the world with Virginia. John was also an active and dedicated member in the community and his church, serving as the Chairman of the Port Orchard planning commission for 28 years and serving as Treasurer of Bethany Lutheran Church for 30 years. John was an accomplished rifleman and marksman sharpshooter in the army, and he enjoyed fishing, photography, coin collecting, stamp collecting, and traveling. He was also a talented artist/cartoonist, dappled in writing poetry, delighted in ending phone calls without saying goodbye, and truly enjoyed singing and whistling while tinkering and fixing anything and everything around the house. John was a man of impeccable integrity and character, he was humble and conservative, but so generous in giving of himself. The Bible was his roadmap through life – Fame is a vapor, popularity an accident, riches take wings, and only character endures. Funeral services are scheduled for 12 noon on June 6th, at Bethany Lutheran Church in Port Orchard, WA, with a reception following the service at Bethany Lutheran Church. All are welcome to attend and celebrate John’s life. In lieu of flowers, please send donations to Bethany Lutheran Church at 151 Tremont W., Port Orchard, WA 98366. The family would like to thank hospice for their care and support during his final months. Online memorial and tribute wall may be accessed at www.rill.com.

John was born March 29, 1930 in Miller, South Dakota. John died peacefully at home Monday morning May 29, 2017 with his wife at his side in Port Orchard, WA at the age of 87. John married Virginia Hokanson on June 6, 1953 in Raleigh, North... View Obituary & Service Information

The family of Otto John Hokanson created this Life Tributes page to make it easy to share your memories.