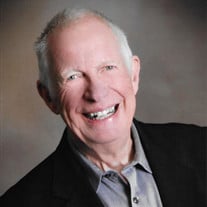 Reverend Orville August Jacobson, 80, passed at home in Indianola December 27, 2019. Born May 24, 1939 in Bemidji, MN to Reverend Oscar A and Olga Jacobson, Orv joined siblings Pearl Darlene and James Frederick. The family lived and ministered in Fertile, MN until Orv was eight years old, when they moved to Bellingham, WA. Upon high school graduation, Orville attended Luther Bible Institute 1957-1958, then Pacific Lutheran University 1958-1962, and Luther Theological Seminary 1962-1966. He married Kathryn Elizabeth Belgum June 29, 1963 and they interned in Kalispell, MT. Ordained in 1966, he served the congregations of Nyssa, OR (1966-1971) and Vale, OR (1967-1971) where he honed his visitation skills before accepting a call to Galilean Chapel in Ocean Shores, WA, where he served from 1971-1988. In Ocean Shores, Orv made it his business to visit every household in Ocean Shores. In 1988, Orv accepted a call to Emmanuel Lutheran Church in Longview, WA. In 1989 he married Donnalee Gorham Ransom. In 2000, they took a call to First Lutheran Community Church in Port Orchard, WA as Visitation Minister, where he served joyfully until retirement in 2012 as Pastor Emeritus. They moved to Indianola in January 2013; she survives him at home with his beloved cat, Tumbler. Orv loved to travel, read, sing, watch movies, hike and play. He belonged to the Kiwanis, JCs, Elks, a round dancing group, hiking group, the North Beach School Board. He loved to play golf, softball and basketball, was fiercely competitive at Scrabble, Pinochle and Monopoly. He was Man of The Year in 1975 (and every year if you ask his family). Orv was a big dreamer, learned scholar, gifted theologian and beloved minister of the gospel who preached of love and inclusion. He never met a stranger, and shook more hands than most of us have ever seen. His hobby was people, and he loved to listen to everyone. He married, buried, counseled, mentored, taught and prayed with abundant joy. His legacy of love abides. In addition to his loving wife, Orv is survived by his daughters Elizabeth (Thad) Kammers and Mary (Jeremy) Eklund; stepchildren Larry (Michelle) Ransom, Lisa (David) Flesher, John (Marianne) Ransom; grandchildren Rachel, Elliot, Ryan, Beni, Jake, Todd, Katelyn, Owen, Jordan and Hailey; numerous devoted nieces and nephews. We cannot imagine life without him. Memorial services will be held January 18, 2020 at 11 am at First Lutheran Community Church, 2483 SE Mitchell in Port Orchard, WA. In lieu of flowers, the family suggests South Kitsap Helpline, Kitsap Humane Society or Lutheran World Relief.

The family of Rev. Oville August Jacobson created this Life Tributes page to make it easy to share your memories.