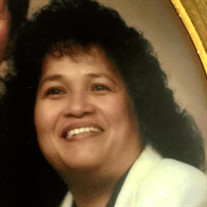 Patricia SN Santini Born April 2nd, 1947 in Hagatna, Guam to Jesus and Remedios San Nicolas. She was raised in Sinajana and attended St. Jude Thaddeus elementary and graduated from George Washington Senior High School. While still in Guam she met and married Jerry in 1968. They had Ron and Chris shortly after. They moved to Port Orchard in 1975. Brian was born in 1976 and then moved to Yokosuka, Japan that same year. In 1983 the family moved to Hawaii, then finally settled back to Port Orchard in 1992. During her time in Japan and Hawaii she traveled to many foreign countries including Australia, Bangkok, Singapore, South Korea, Mexico and Hong Kong. During this time, she also made sure to always go back and visit Guam to see her brothers and sisters and nieces and nephews. Besides seeing the world, she was extremely passionate about Seattle sports, especially her Seahawks. She loved spoiling her grand kids and her dog, Toka. She was an active member of St. Gabriel Catholic Church, and frequently volunteered for the Knights of Columbus’ breakfast. She had many friends and loved playing bingo and winning at the casinos. Preceded in death by; Parents Jesus and Remedios San Nicholas, brothers Rufo and David San Nicholas, Sister-in-Law Francis San Nicholas, and Brother-in-law Johnny Ramirez. Survived by her husband of nearly 53 years, Jerry Santini; oldest son Ron Santini and his wife Donna with sons Tyler, Nathan and Gabriel; Chris Santini his wife Christina with sons Kail, Dylan and Jacob; youngest son Brian Santini his wife Michele with daughters Briley and Malia; her sisters Bert Ramirez and Lou San Nicolas; brother Johnny and his wife Elizabeth San Nicolas; sister Annie and her husband Avelino Agustin; sister Priscilla and her husband Joseph Benavente; and numerous nieces and nephews; and her dog Toka. Services will be held at St. Gabriel Catholic Church in Port Orchard on June 21st at 11am.

The family of Patricia SN Santini created this Life Tributes page to make it easy to share your memories.