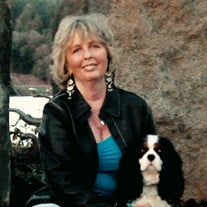 Her first passion in life was teaching. She taught for many years at the Francis Hadden Morgan Center and went on to be a title one teacher at North Mason Middle school where she was known amongst the kids for throwing epic end of the year horseback riding/pool parties. Her love of children ranged from adopting her youngest daughter to opening her home to foster care system and even extended to many of the neighborhood kids. She supplemented her income during that time by dabbling in real-estate. She was a genius at keeping cost down by utilizing our indentured servitude. To this day, we value the skill set we gained by our unsolicited participation in House Flipping 101. In her later years, she became a well-respected breeder of Cavalier King Charles Spaniels. If you were lucky enough to qualify to become the owner of a precious Glenwood Cavalier, then you undoubtedly know our mothers love and passion for the breed. We are sure she is glad to finally be reunited with her beloved “Sparky” and her many fur babies that crossed over the rainbow bridge after him. Our Mother had a life-long love affair with deviled eggs, Reese’s Peanut Butter Cups, and Ben and Jerrys ice cream. She loved a good joke, Jesus, and all things leopard print. She never turned down a good old fashion game of cards or a heated debate. She was the queen of the never ending to-do list, was fearless at giving overly honest advice, and had an obsession for plants that some would say constituted counseling. She was smart, witty, strong willed, and stubborn. She could often be found using those attributes to correct all that was wrong in the world. She was undoubtedly quirky and eccentric. But she had a knack for bringing her family together and creating great memories. From fishing parties to Easter egg hunts to her famous “White Elephant” Christmas gatherings, her memory will live on in many of us. She is preceded in death by her Mother Patti Boyle, Fathers Joseph Wilson and Patrick Boyle, Sister Elizabeth (Betty) Boardway, William (Bill) Wilson, and Bernard (Bernie) Wilson. She is survived in death by her siblings Jim Wilson, Tom Wilson, Colleen Wilson, John (Jack) Wilson, and Ann (Darlene) DeChellis; her children Debbie Sims-Smith (Husband-Mike Smith), Steve Ehlert (Wife – Janis Ehlert), Dawn Michele Wilson and 2 children through marriage she lovingly called her own, Arron Olson (Wife- Jamison) and Jeremy (Wife - Shayla) Olsen. She leaves behind 12 grandchildren and 17 great grandchildren. Following the graveside at Sunset Lane, there will be a gathering at the residence of Steve and Jan Ehlert. Please contact them for gathering information.

Her first passion in life was teaching. She taught for many years at the Francis Hadden Morgan Center and went on to be a title one teacher at North Mason Middle school where she was known amongst the kids for throwing epic end of the year horseback... View Obituary & Service Information

The family of Patricia Leona Wilson created this Life Tributes page to make it easy to share your memories.

Her first passion in life was teaching. She taught for many years...