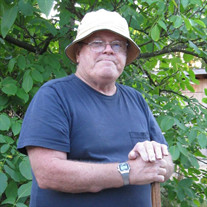 Patrick Dee affectionately known as Pat, was born on July 30,1938 to John Andrew and Iris (Carpenter) Callaghan in Hoquiam, WA where he was also raised. He lost his father when he was only 14 years old and like many young boys started working then but he still managed to graduate high school. Pat served in the United States Navy for one enlistment as a Seabee. After he got out of the Navy in October of 1959, he married Shirley Kosher in Aberdeen in September of 1960 and they eventually moved to Bainbridge Isle., WA. He worked as a Carpenter by day and volunteer police officer for the Winslow Police Dept. He liked telling his daughter Ann of all the oddities that he and his partner came across as police officers. He and Shirley raised Dobermans and had a small kennel. They did some showings of their dogs in the Island’s Fourth of July parades for some years, using floats that he built and drove. Using his hands to build was his passion. They also showed the dogs in the show rings. They moved to other places in the north end of Kitsap county, and he remained a carpenter and eventually landed a job at PSNS. He worked there for 18 years for shop 64, the Carpenter Shop where a bunch of master carpenters lived the dream building cool stuff with other people’s materials. He received awards and did some managing during the weekends. His last job was working with the WA state ferries in Bainbridge Island doing odd carpentry repairs. They moved to Mason County, Belfair area in the late 80’s where they eventually found a nice piece of land to grow old on. Pat was a devoted grandfather to both his granddaughters, and he had taught at least one of them how to work on automobile and lawn mower engines (she always wanted to learn new things). He was a very patient man and was willing to show you how something worked and how it went together, from gas engines to carpentry. We also learned the ins and outs on how to use carpentry tools and as many other things as he could teach them and they were willing to learn. He provided for his family the best way he knew how and that was using his carpentry skills. Patrick (Pat) Callaghan passed away on January 1, 2019. He will be missed by all those who knew and loved him.

Patrick Dee affectionately known as Pat, was born on July 30,1938 to John Andrew and Iris (Carpenter) Callaghan in Hoquiam, WA where he was also raised. He lost his father when he was only 14 years old and like many young boys started working... View Obituary & Service Information

The family of Patrick "Pat" Dee Callaghan created this Life Tributes page to make it easy to share your memories.