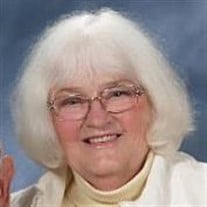 Devoted and loving mother, grandmother and great grandmother, passed away on Sunday September 29, at the age of 90. Born in Cumberland Maryland to her parents Harry S. and Alta Anderson. Patty graduated from Allegany High School class of 1947. Patty met and fell in love with her husband Stanley Edward Bishop and they were married in 1949. They would have celebrated their 70th anniversary on September 16, 2019. Patty and Stan soon moved to Florid where Dan, Dawn and Dean were born. The family of 5 then moved to Cape Cod for two years where Pooh (Diane) was born, then off to Vandenberg Air Force base California. While in Santa Maria the fifth child Dru was born. Finally, to Washington State, living in Twin Lakes, Puyallup, back to Twin Lakes and then ending in Lakeland Village where they built their home in 1990 and another son was added to the family, Randy Jensen. Patty was a wonderful soul, she loved to paint, camp and daily coffee klatch with her neighbors. Watch football, golf and the Hallmark channel. She organized a ski school, and for years, both Stan and Patty were very active in the PGA and with the Evans Scholarship. Patty could fix anything, a lamp, dishwater, toilet, refrigerator, dryer...you name it! She was always the MacGyver of the neighborhood. Patty supported Stanley through all of his accomplishments and had no issues being in the background. Patty had been across the United States over 13 times seeing every state except Main and Alaska. Patty is survived by son Dean Bishop, daughter Diane (Dan) Bishop-Gullikson, son Dru Bishop, Son in law Bob Gibson and son Randy (Ida) Jensen. Patty has 7 grandchildren and 9 great grandchildren. She was preceded in death by her parents, husband Stan in 2011, son Dan, killed in a car accident in 1988 and daughter Dawn Gibson due to illness in 2017. Patty loved everyone she met or who Stanley brought home. Her kindness was never ending. 'SO LONG FAREWELL AUF WIEDERSEHAN GOODBYE' Contributions can be made in memory of Patty to: North Bay Lutheran Community Church, Allyn, WA.

Devoted and loving mother, grandmother and great grandmother, passed away on Sunday September 29, at the age of 90. Born in Cumberland Maryland to her parents Harry S. and Alta Anderson. Patty graduated from Allegany High School class of 1947.... View Obituary & Service Information

The family of Patty Sue Bishop created this Life Tributes page to make it easy to share your memories.