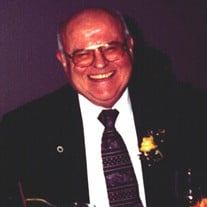 Paul was born in Brooklyn, New York on May 24, 1931. He was the youngest of nine. He graduated from Manhattan College with a degree in Civil Engineering. Paul met his wife, Rosemary in 1952 and were married in 1955. Paul would best be described as a hopeful, adventurous, challenging, surprising, and positive individual. In his career and work life, Paul was a Civil Engineer. Early on, he started his own business (Standard Precast Concrete) where he developed and held two patents for precast concrete drainage structures. Later on, he was a civil engineering consultant working for himself and also for engineering companies in New York and Washington State. In 1978, Paul relocated his family from New York to Washington State to start a new adventure in life. He then was the County Engineer for Kitsap County until his retirement in 1997 Paul lived a life of service. Service to his family, service to his community, and service to his church. When he lost his wife, Rosemary in 2011, he continued to serve with even more passion than before. Paul wanted to make sure that when he was finally done with this life, and with his wife Rosemary in heaven, that he helped and served as many people as possible. He wanted to leave as big a footprint as he could...and he did! Paul was active in the Lions Club while in New York (including president), long time member of Kitsap Kiwanis Club (past president), Board member for Kitsap Mental Health, usher and Eucharistic minister for St. Gabriel Church, Port Orchard, Board Member and President of St. Vincent de Paul Society. Recently, Paul worked with the volunteers at St. Vincent to raise funds for the new thrift store facility. He was a Knight of Columbus and a member of the Legion of Mary. Paul's greatest joy in volunteering was to work directly with the people in the community, especially reading to the kindergarten children through Kiwanis. Paul loved seeing the enjoyment in their eyes and excitement to have him read the story book to the class. This made him eager to go back for more visits the following week. Paul always loved spending time with his wife, three sons, daughter-in-law and grandchildren. A fond memory from a summer camping trip with his younger family - One summer Paul rented a houseboat for a week on Lake Champlain. At the end of a morning of boating, dad decided to drop anchor for lunch. Being a "city-dad", he failed to realize his foot was standing in the coil of anchor rope. One second he was on the deck...the next he was in the water!! He never lived it down. On another summer camping trip, we were camping in upstate New York ( Roscoe , I believe), after hearing a bunch of commotion outside the tent, we came to understand that a bull, named Charlie Brown had escaped a nearby farm and had evaded capture by running through our campground!! No one was hurt, but we never thought a bull was going to be part of our camping with nature adventure! Paul and his wife, Rosemary, had a wonderful married life. When their sons threw them a wonderful celebration party for their fiftieth wedding anniversary at McCormick Woods. Paul and Rosemary called all family and friends from in town and out of state. It truly was a beautiful and fitting tribute to a couple everyone loved and admired and one of their fondest memories. Paul and Rosemary had a long and happy marriage; they truly were the model of a happy couple. Paul loved to learn new things and always challenge himself and others to improve. He always would say 'accomplish all you can', 'push yourself beyond what you think your limits are' . Paul always took up new hobbies including learning to play the piano and taking Hebrew lesson in his 80's. Paul is survived by his three sons (Paul Edward, Kevin and Stephen), his daughter-in-law Susan, grandsons (James Lingle and Devon Brosnahan) grand daughter Gabrielle Rosemary, and 10 great-grandchildren. In lieu of flowers, donations can be made in Paul's memory to St. Vincent DePaul, Kiwanis Club or Kitsap Mental Health.

Paul was born in Brooklyn, New York on May 24, 1931. He was the youngest of nine. He graduated from Manhattan College with a degree in Civil Engineering. Paul met his wife, Rosemary in 1952 and were married in 1955. Paul would best be described... View Obituary & Service Information

The family of Paul Dour created this Life Tributes page to make it easy to share your memories.