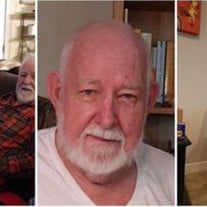 Paul Anton Kemper (1941-2021) Loving Husband, Devoted Father, and Always Helpful Friend From Shirley (his wife of nearly 61 years): In the early hours of Tuesday morning, October 19th, my sweetie Paul Kemper left his earthly body to go and fix the Angels’ halos. We were married almost 61 years and were 18 when we got married. He was an extraordinary man. He could and did fix just about anything. He loved the challenge and often brought home things people discarded as useless. He had a magic touch and a sense of what was wrong and did not like to throw things away. We had many refurbished lights, fans and kitchen appliances throughout the years. He loved me with a steady and passionate love. He fathered four children of whom he was so proud and loved with all his heart. Vernon, Joyce, Karla and Katrina. He loved his daughter-in-law Judy, son-in-law Roger and son-in-law Mark as if they were his own. When our children gave us grandchildren Daniel, Susie, Annette, Patience, Joshua, Lynne, Kimberly, Katherine, and Lauren and recently Jeremy, he loved them all truly and well. As the grandchildren began to have their families he opened his heart to Joseph, Xavier, Mazikeen, Zena, Athena, Trenton, Brooklyn, Cheri, Dezsyl, Furie and Frank, and then there is great-grand daughter Nevaeh. All were touched by his love. He helped so many people over the years. It did not matter what it was, if he could help, he did. He was a loyal friend and enjoyed a rousing game of Pinochle or Sequence whenever he could. A lifetime lover of country music he would go see his favorites whenever the chance came his way and recently Paul and I, along with Vernon and Judy saw Marty Stuart and the Fabulous Superlatives. He was so happy. Fly my love! The Story of Paul’s Life Paul was born on Christmas Day in 1941 to Ruth Isabel Boyer and Harry Joseph Kemper in the small town of Bloomsdale, Missouri. He grew up there and graduated from Valle High School in St. Genevieve, Missouri. He married Shirley Ann Johnston on November 5th, 1960. Paul was a master automotive technician who worked for Ford vehicle repair shops/dealerships in Perryville and Ballwin Missouri and later in Tempe, Arizona. He was recognized for his keen ability to use his senses, experience, and logical reasoning to troubleshoot and repair the most difficult problems. He mentored many fellow technicians over the years and shared his techniques and wisdom with many young mechanics. He was also a self-taught electronics technician and television/radio repairman, and was also able to keep the electrical appliances of his family and many of his friends working like new long past the warranty periods. He had a deep natural curiosity to know the inner workings of even the most complex machines, and there was not a technical problem he could not solve. He shared this gift lovingly with family, friends, and more than a few strangers who needed his assistance when their vehicle was stranded by the side of the road. Paul loved music, dancing, and games. The sounds of “Willie, Waylon, and the boys” floated through the Kemper home every weekend morning and Paul kept a collection of vinyl records of his favorites. He and Shirley were awesome square dancers for many years. As Shirley said earlier, he loved Pinochle and Sequence… and was sneaky good enough to make you think that he could see your cards or found a way to cheat a bit. Paul is survived by four younger sisters: Rosemary Gibbar (Joe), Anna Mae Schoenebeck (Roy), Helen Ramsey (Ronnie), and Peggy Lee Moehlmann (Rich) and many wonderful nieces and nephews. He also leaves behind his wife Shirley, and their son and daughters: Vernon (wife Judy), Joyce, Karla (Roger Owensby), Katrina (Mark Ashinhurst) and many grandchildren.

The family of Paul Anton Kemper created this Life Tributes page to make it easy to share your memories.