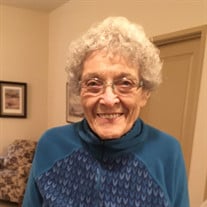 Paula White (Mom, Grandma, Aunt, neighbor, friend, sorority sister, and bridge partner). Whoever she was to you, you were likely blessed with a quick smile, a positive outlook, someone who gave much more than she ever asked for. She was intelligent,... View Obituary & Service Information

The family of Paula Frances White created this Life Tributes page to make it easy to share your memories.