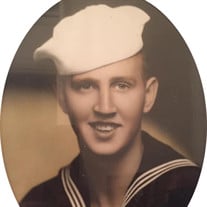 Maurice “Pete” Binford, 83, passed away at his home in Bremerton, WA on December 18th, 2018. The eldest child of Maurice Edward and Lucille May Binford, he spent most of his childhood free time hunting and fishing. On September 23rd, 1952 at the age of 17, Pete enlisted in the United States Navy as a Seaman Recruit. While serving aboard the USS LST-762 he participated in Operation Castle’s nuclear tests at Bikini Atoll. He then served aboard the USS Duncan (DDR-874) where he found interest in becoming a Gunner’s Mate. In 1956 he transferred from active duty to the reserves finishing his service in 1959. After his service he worked as a dock hand, a rigger at Olympia shipyard, and then a C/740 rigger at Puget Sound Naval Shipyard in Bremerton, WA. After retiring on disability from PSNS, he then worked to become a barber setting up a small shop in his own home, regularly giving haircuts to the elderly and his neighbors. On September 2nd, 1960, Pete married Carol Keir in Renton, WA. They were a loving couple who could regularly be found enjoying their time together doing simple things like coloring in color books at the dining room table. Overcoming the loss of their first child, a girl, to stillbirth in 1961, they had 2 wonderful sons (1962 & 1964). Sadly their love story was cut short when Carol passed away in July of 1971. Pete was introduced to Lu Ann by his brother Bob, and they were married on October 6th, 1978. He loved her dearly, regularly bringing her home flowers and his favorite gift for her, chocolates. Even after all the hardships of his life, he had a strong smile and always wanted to make others laugh. He had a quiet passion for art and poetry, and in recent years enjoyed watching tv shows like duck dynasty and forged in fire. Quite skilled in telling stories, he regularly made his postman late on his route, and had many caring friends who regularly stopped by to check up on him and listen to his tales. Pete will be laid to rest with honors at Tahoma National Cemetery on January 2nd, 2019 at 1130am. All who knew him and wish to pay respect are welcome to attend.

Maurice &#8220;Pete&#8221; Binford, 83, passed away at his home in Bremerton, WA on December 18th, 2018. The eldest child of Maurice Edward and Lucille May Binford, he spent most of his childhood free time hunting and fishing. On September... View Obituary & Service Information

The family of Pete Binford created this Life Tributes page to make it easy to share your memories.

Maurice “Pete” Binford, 83, passed away at his home in Bremerton,...