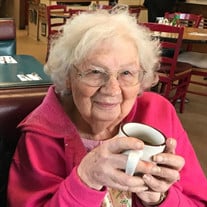 Phyllis Anita Bails Brown died in Port Orchard, Washington on Saturday, November 21, 2020 at the age of 91. Phyllis was born in Corvallis, Oregon to Philip Alfred (Al) and Anna Beatrice Bails on February 21, 1929. She had one younger brother, Lawrence Alfred Bails. Phyllis met her future husband, Earnest Wilson Brown, while they were both attending Oregon State University in Corvallis, Oregon in the Fall of 1947 on a blind date. Phyllis was taking classes in Home Economics and Earnie was enrolled in the School of Forestry, where he graduated with a Bachelor of Science degree in June 1949. Earnie and Phyllis were married on August 20, 1949 in Corvallis, Oregon. Phyllis worked on and off throughout her years to help support her growing family as a data processor at Pacific Lutheran University in Tacoma, Washington; as a cashier at Shop-Mart in Parkland, Washington and as a shipment clerk at the Bremerton Naval Shipyard in Bremerton, Washington. Following the death of her husband in July 2013, Phyllis moved from the little house they had been renting in Port Orchard, Washington to a studio apartment at the Sydney House, a senior living community (now known as Liberty Place), then to Willow Creek, an adult family home. Over the years, Phyllis enjoyed a variety of activities from knitting and crocheting to attending church and singing in the choir to reading and working on crossword puzzles. She was always smiling, made friends easily and was the best mother and grandmother there ever was to her children, grandchildren, and great-grandchildren. Phyllis and Earnie had five children - Bonnie Sue Brown Belvin (Mark); Thomas Lynn Brown (Sonja); Dan Wilson Brown (Kellie); Nancy Beth Brown Haskins (Joe), and Catherine Louise Brown Hoehne (Scott). We lost Nancy in March 2018 and Bonnie’s husband Mark in May 2018. She also had ten grandchildren and thirteen great-grandchildren, with two more great-grandchildren on the way in early 2021. She will sorely be missed, and all the flowers in the world will never be able to replace the sweetest, most loving person we have ever known. Rest in Peace, Phyllis.

Phyllis Anita Bails Brown died in Port Orchard, Washington on Saturday, November 21, 2020 at the age of 91. Phyllis was born in Corvallis, Oregon to Philip Alfred (Al) and Anna Beatrice Bails on February 21, 1929. She had one younger brother,... View Obituary & Service Information

The family of Phyllis Anita Bails Brown created this Life Tributes page to make it easy to share your memories.