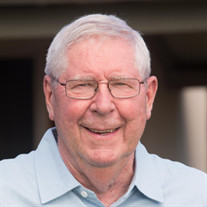 Ralph Alexander Lintz, devoted husband, father, grandfather and brother, passed away peacefully on June 24, 2021, from natural causes. Ralph was born on July 27, 1939, in Deer Lodge, Montana, to William and Mildred (Mootz) Lintz. His father was a locomotive engineer for the Milwaukee railroad and his mother was a homemaker and talented seamstress. Ralph was the oldest of four children and the Lintz household was a popular and lively gathering place in Deer Lodge. Ralph graduated from Powell County high school in 1957. Throughout his childhood, he worked to earn money for his college education. During high school Ralph formed many enduring friendships, especially the people he met while working at the local ice house loading ice onto refrigerator railcars, often at night, and right up until the morning school bell. Like many of his friends, Ralph paid his own way through college and, in 1962, he graduated from the University of Montana in Missoula with a B.A. in Education. Ralph could often be found studying at a local diner where he washed dishes and was sometimes paid in free meals. After college, with a 1-A draft status, he enlisted in the U.S. Air Force Officer Training School. He served as a Personnel Officer in Mississippi, Texas and Turkey with the rank of 1st Lieutenant. Always looking for a place to play golf, he built a small course at the base in Samsun, Turkey. After discharge from the USAF, Ralph returned to the University of Montana and earned a Masters in Business Administration in 1967. Having first met in Deer Lodge in 1959 and, following an 8-year long-distance off-and-on courtship, Ralph married Dorothea (Dot) in 1968. Together they moved to Seattle where Ralph began work at Boeing as a marketing analyst in their commercial airplane division. In 1970, Ralph and Dot settled in Kitsap County and Ralph started work at what would become Great Northwest Bank in Bremerton. Hired into the marketing department, Ralph’s role grew as he became Director of Marketing and Branch Operations, Executive Vice President, President, Chief Operating Officer and Board Member. He retired in 1992. Ralph stayed busy outside of work and was active in the community throughout his life. A Bremerton Rotary member for 34 years, he served as Club Secretary and could often be found hosting the hospitality table. He also volunteered for the United Way Loaned Executive program and was on the Kitsap YMCA Board. Ralph served on the Board of Harrison Hospital and its Foundation for 36 years, including a term as President. These philanthropic efforts were rewarded in 1996 when he was named a community hero by Olympic organizers and was chosen to carry the Olympic torch on its relay route through East Bremerton. Ralph and Dot were also honored with the Kitsap Community Foundation’s Spirit of Philanthropy award in 2016. Ralph was a devoted father who spent many weekends coaching girls’ soccer, boys’ basketball, or as an umpire in boys’ baseball. Ralph was an avid golfer and spent many mornings before and after his retirement on the course at Kitsap Golf & Country Club. He played league basketball at the Kitsap YMCA as often as he could. At home he spent many hours working in the garden and sitting on the deck watching passing ferries, Navy ships, submarines and countless sunsets. Ralph became famous for his monthly “Good Morning” emails and Facebook posts of his garden. Ralph loved being a grandpa, especially holding the grandkids while they napped, reading to them and playing outside. Luckily, he gladly tolerated their endless pranks. Ralph is survived by his wife, Dorothea, son Charles (Carrie), daughter Ellen Dempsey (Sean), and grandchildren Rylie, Jacob, Daniel, Lauren and Colin. He is also survived by his sister Suzanne Ives and brothers Bill Lintz (Judy) and Dave Lintz (Stacy). His extended family includes sister-in-law Margaret Striebel, brother-in-law Jim Striebel (Bonnie), Joan Lintz (Terry), and numerous cousins, nieces and nephews. He was preceded in death by his parents. A Celebration of Life will be held at Kitsap Golf & Country Club in Bremerton on Sunday, August 15, 2021 from 1-4 pm. In lieu of flowers, donations may be made to the YMCA of Pierce and Kitsap Counties, the St. Michael Medical Center Foundation (Nursing Education), or the University of Montana Foundation (College of Business).

The family of Ralph Alexander Lintz created this Life Tributes page to make it easy to share your memories.