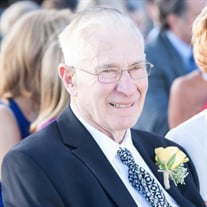 Raymond Florence Fugier passed away on Friday, January 29, 2021 at St. Anthony Hospital in Gig Harbor, WA. During his last days, he was surrounded by his loving wife and family. Raymond was born to Carl and Louise (Mohler) Fugier on May 8th, 1937 in Hot Springs, SD. He grew up and attended school in the Buffalo Gap, SD community. When Raymond was not working on the family ranch, he participated in 4H, basketball, football, track and field, and even glee club. He graduated from Buffalo Gap High School in 1955. After graduating high school, Raymond attended and graduated from Mechanics Trade School in Fargo, ND. While not in school, he continued to work for the family and other ranchers in the Buffalo Gap area. Raymond was a true cowboy, participating in cattle drives and even hunting buffalo while working for Custer State Park in the Black Hills. Following trade school, Raymond would spend his summers in Monroe, WA with his uncle, Floyd Fugier, and his wife Mildred. Here, he worked as a mechanic at a cannery in nearby Snohomish. Here, he met Nancy Brommers, who was living next door. After courting for two years, Raymond and Nancy were married on October 3rd, 1959 in Monroe. Shortly after, the couple moved to Snohomish where they put down roots and raised their family. In 1961, Raymond and Nancy welcomed their first son, Jeffery Raymond. In 1963, Dale Patrick was born. While not chasing after his two active and athletic boys, Raymond raced “modifieds” at Sky Valley Speedway and enjoyed a number of outdoor activities including fishing and boating, hunting, camping, gardening, and exploring the Northwest. While living in Snohomish, Raymond worked for Twin City Foods in Stanwood, WA as a Lead Mechanic. After retiring from the company, he worked for three years as an independent logger before taking the position of Chief Mechanic for the City of Everett Fire Department in 1982. Raymond outscored over 300 other applicants to win the position. He spent the last five working years with the City of Everett, where he worked as a Senior Mechanic until he retired in 2002. Shortly after retiring, Raymond and Nancy sold their long time Snohomish home in 2003, and moved to rural Port Orchard, WA. The happy couple moved into their dream 2-story home on 2.5 acres. Shortly after, Raymond built a large garage and shop that would occupy much of his time. During retirement, Raymond enjoyed traveling with his wife and family. When not cruising to the Bahamas, Alaska, Australia and New Zealand, the two were traveling and visiting family in many states, including Arizona, California, Florida, Massachusetts, Texas, and of course South Dakota. When not traveling, Raymond spent his time working around the home and in the garden or helping out his boys and their families. Raymond was the pattern that God created for all good and upright men. He was a gracious, humble, and kind-hearted man; one of impeccable character, loyalty, and unconditional love. And although hard work was his hallmark, Raymond’s love of and dedication to family was second to none. We will all miss his warmth, his contagious smile, and his strong presence. Raymond is preceded in death by his parents, Carl and Louise (Mohler) Fugier. He is survived by his wife of 61 years, Nancy (Brommers) Fugier, Port Orchard, WA. Brother: Stanley (Cora) Fugier, Rapid City, SD Sister: Karen Nepper, Rapid City, SD Sister: Carleen (Gary) Mahan, Rapid City, SD Son: Jeffery (Teresa) Fugier, Port Orchard, WA Son: Dale (Mary) Fugier, Snohomish WA Grandkids: Charles (Melanie) Stasny, Cave Creek, AZ Kyle (Elizabeth) Fugier, Ferndale, WA Olivia Derouin, Sioux Falls, SD Karolyn Stasny, Kirkland, WA Connor Fugier, Port Orchard, WA And two great grandchildren. Services: Raymond will be remembered in a small family celebration, before leaving for his final resting place in Buffalo Gap, SD. Memorial Service: When: Saturday, February 13th, 11:00 AM Where: Chamberlain McColley's Funeral Home 401 N. Garden Street P.O. Box 812 Hot Springs, SD, 57747 Burial at Buffalo Gap Cemetery immediately following. In lieu of flowers, the family requests donations be made to The Parkinson's Foundation in Raymond’s honor.

Raymond Florence Fugier passed away on Friday, January 29, 2021 at St. Anthony Hospital in Gig Harbor, WA. During his last days, he was surrounded by his loving wife and family. Raymond was born to Carl and Louise (Mohler) Fugier on May 8th,... View Obituary & Service Information

The family of Raymond Florence Fugier created this Life Tributes page to make it easy to share your memories.