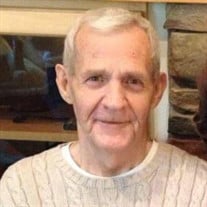 Richard Eugene Aycock, 74, passed away from congestive heart failure on Sunday, September 29th, 2019 surrounded by family and his best friend at his beloved home in Port Orchard, WA. He was born in Columbus, OH in 1945. Dick graduated from from North High School in Des Moines, IA and received his Master's Degree from Drake University. He graduated from Marine Corps Recruit Depot Paris Island, SC in 1962 and proudly earned the title of United States Marine. He lived most of his years in Altoona, IA where he married Patricia, his wife of 45 years. Dick taught both Spanish and French at Lincoln High School in Des Moines, IA for over 20 years. After his retirement, Dick and Patti moved into their gorgeous log cabin home sanctuary in Port Orchard, WA in 2002 to be close to their two sons, Michael and David, and grandchildren, Cody and Ashley. He cherished spending time with his family and teaching his grandkids how to do different projects, telling a funny 'dad joke' or educating everyone with an interesting fun fact from the hundreds of books he had read over his lifetime. Dick's hobbies and achievements were many. He earned a black belt in Tae Kwon Do, and practiced and taught Tai Chi. He also enjoyed fencing, playing guitar, and piano. He loved studying languages from French, Spanish, and German to American Sign Language. An avid reader, he amassed a library of books over his lifetime and loved history and biographies. He also enjoyed woodworking and outdoor projects. Dick and Patti were avid animal lovers, and had over 15 pets throughout his life, including dogs, cats, and birds. He is survived by his wife Patricia, sons Michael and David, grandchildren Cody and Ashley, brothers James and Dale, sister-in-laws Mary Lou and Linda, and many nieces and nephews. He is predeceased by his father Mack and mother Maxine. Memorial services for Dick will be performed at VFW Post 2669, 3100 Mile Hill Dr., Port Orchard, WA on Sunday, November 3rd 2019 from 1-5pm.

Richard Eugene Aycock, 74, passed away from congestive heart failure on Sunday, September 29th, 2019 surrounded by family and his best friend at his beloved home in Port Orchard, WA. He was born in Columbus, OH in 1945. Dick graduated from... View Obituary & Service Information

The family of Richard Eugene Aycock created this Life Tributes page to make it easy to share your memories.