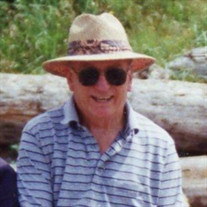 Richard “Dick” Jesse Haney, was born at St. Joseph’s Hospital in Tacoma, Washington to Jesse and Betty (Novack) Haney on December 5, 1927, one of three children. The era in which he grew up was very different from many of our experiences. In 1927 Charles Lindbergh made the first solo flight across the Atlantic. He flew from NYC to Paris in the Spirit of St. Louis; Henry Ford revealed the Model A which sold in different body styles starting at $460.00; work began on Mt. Rushmore; Leon Trotsky was removed from the communist party in Russia and Joseph Stalin took power which would have huge ramifications in the world in years to come. Silent films took on a new prominence; the first transatlantic phone call was made. Soon the Great Depression would take hold and change the way people looked at even the simplest of commodities. There was a good chance that as he grew up in Tacoma, pop-up toasters were just becoming a thing, telephones were not yet in every home and those that had them had party lines, there were no microwaves and very few televisions if any for miles. Radios were a primary form of family entertainment. He met his future wife, Mary, after high school even though they knew of each other while in High School, they never dated during school. He married his young wife, Mary Cecilia Finlay on October 23, 1948 in the rectory of Star of the Sea Catholic Church in Bremerton. They had five children together, four boys; James, Michael, Richard, Gregory, and one daughter, Patricia. They had recently celebrated 71 years of marriage. Richard worked for and retired as a supervisor from what was commonly known as Naval Torpedo Station Keyport. Now more formally, Naval Undersea Warfare Center Division, Keyport. He served as an assistant scout leader for many years in the 70’s and was also Lion’s Club President. He enjoyed golfing in his spare time and he once shot a hole in one at Gold Mountain’s #3 hole. He absolutely thrived in situations where the family spent time together. The family enjoyed extended auto camping trips going to places like Sun Lakes State Park, Deception Pass, Mount Rainier, Yellowstone National Park, The Grand Canyon and Yosemite. He supported his sons in Scouting; participating as a leader on several 9-day 50-mile adventure hikes in the Olympics, Mount Rainier and the Cascade Crest Trail. He enjoyed fishing, boating, and water skiing. He first learned skiing at Twanoh St. Park and later transitioned to Dabob Bay. Dabob Bay became a family favorite destination and a summer family tradition. He enjoyed traveling in general but especially RV trips to Arizona with more fishing and golfing. He and Mary dedicated themselves to family life and building lifelong family memories which are now indelibly imprinted into every succeeding generation. On June 24, just a short time ago, he went on to be back with his Mary after a brief illness. He was preceded in death by his loving wife, and his sisters Marjorie and Bettie Lou. He is survived by all five children, and many grandchildren. He will always be remembered and greatly loved by those who knew him, especially his family.

Richard &#8220;Dick&#8221; Jesse Haney, was born at St. Joseph&#8217;s Hospital in Tacoma, Washington to Jesse and Betty (Novack) Haney on December 5, 1927, one of three children. The era in which he grew up was very different from many... View Obituary & Service Information

The family of Richard Jesse Haney created this Life Tributes page to make it easy to share your memories.