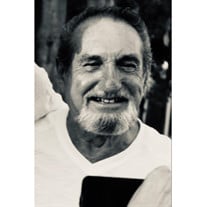 RICHARD CLAUDE (AKA “ON SALE”) MOREAU 75 Richard Moreau passed away on November 4th after complications from a major heart attack. He was born March 11, 1943 to Henri and Eugenie (Thibodeau) Moreau in Nashua, NH. He was the youngest of 10 children. Richard graduated from Nashua High School in 1961. After graduation he worked for Improved Machinery as a machinist. He joined the United States Navy in 1964-1968. After one year of his military service, he married Patricia Loukides. They moved to Bremerton, WA in 1966 with wife and six month old son, Henri. The next two years he completed his navy career on the USS Ranger. After moving back to Kitsap County in 1968 Richard worked for Kluge Chevrolet in Bremerton for two years as an auto detailer. Richard attended Clover Park School from 1970-1972 and graduated with his certificates for Airframe and Power plant Mechanic. In 1972 was he was employed at Keyport Torpedo Station. After two years he was transferred to Puget Sound Naval Shipyard as a machinist marine Shop 38. After 40 years of service he retired on November 2, 2008. Richard was a life member of the VFW Post #239. Richard was well loved and was always willing to reach out and help everyone he met. He enjoyed cars, going to auctions, and getting a good deal which is where his nickname "on sale" originated. In his later years, he traveled frequently to Arizona, Germany, California and many parts of Europe with Henri and Cris. His greatest joys came from being around family and friends while cooking and eating. His wife Pat of 53 years of marriage and number 1 son, Henri, of Port Orchard and Number 1 daughter Cris of Albershausen, Germany and her two sons, Elias and Silas Haenssler, survives him. His siblings also survive Richard. They are his two brothers, Paul of Nashua NH, and Henry Moreau (and wife Marion) of Merrimack, NH and two sisters Alice Moreau of Nashua, NH and Lucienne Lampert of New Bedford. Richard has been predeceased by his parents and brothers Rene, Marcel, Oscar and Eugene as well as sister Lorette Richard. The Moreau family invites everyone to the military burial service on Thursday, November 15th at 9:00 AM sharp at the Mount Tahoma Cemetery. Followed by the Celebration of Life Potluck on Saturday, November 17th at the Port Orchard Eagles upstairs hall. Everyone is invited to bring a main dish at 11:30 and then the family style meal and sharing starts at noon.

RICHARD CLAUDE (AKA &#8220;ON SALE&#8221;) MOREAU 75 Richard Moreau passed away on November 4th after complications from a major heart attack. He was born March 11, 1943 to Henri and Eugenie (Thibodeau) Moreau in Nashua, NH. He was the... View Obituary & Service Information

The family of Richard Claude Moreau created this Life Tributes page to make it easy to share your memories.

RICHARD CLAUDE (AKA “ON SALE”) MOREAU 75