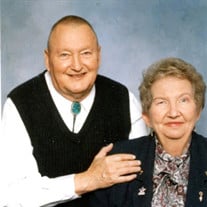 Richard Lowell (“Dick”) Roe Born: May 11, 1932 Died: January 3, 2019 On January 3, 2019, Dick Roe finally found peace after a prolonged battle with dementia. He was raised on the farm in South Dakota. After high school he joined the Air Force during the Korean War. He got to travel the world and spent time in Japan, Goose Bay, Labrador, and Germany. After his last overseas tour he came home and told friends and family he was going to Warner Robins AFB in Georgia to find him a “Georgia Peach”. Luckily for us he found Anna Rothluebber who grew up 90 miles south of him in Fordyce, Nebraska. They were married on May 20, 1961. They spent 44 years together before she died on September 8, 2005. He loved to play games, more importantly to win. No matter what happened he always had a smile on his face and a gracious greeting for everyone he met. He will be missed. He was preceded in death by his parents, his wife Anna J. (Rothluebber) Roe, a daughter Elizabeth Marie Roe, a brother John Stanley Roe and sister-in-law Cleo Mae (Jastram) Roe. He is survived by two sons, Matthew William Roe (Sue) of Mechanicsville, Va and Donald Anthony Roe of Belfair; a daughter Theresa Annette (Roe) Mattson (Dean) of Orlando, FL; one granddaughter Jordan Elizabeth (Malland) Buechler (Edwin) of Tracy, CA; three sisters, Joanne Marie (Roe) Soma (Arvin) of Fairmont, MN, Jeanne Eileen (Roe) Kinnison (Bill) of Casa Grande, AZ, and Janice Kay (Roe) Clark (Scott) of Brandon, SD. Flowers can be sent to Rill Chapel 1151 Mitchell Avenue, Port Orchard, WA 98366. In lieu of flowers, donations can be made to the Disabled American Veterans

The family of Richard Lowell Roe created this Life Tributes page to make it easy to share your memories.