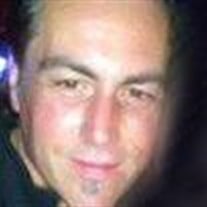 Riley Gibson was born June 6, 1969 at Travis Air Force Hospital in California, to parents Rick & Dee Gibson. Riley lived in Virginia & California before moving with his family to Port Orchard in 1977 where he attended Star of the Sea school and later Marcus Whitman Jr. High where he met his best friend Sean Lemley and other lifelong friends Dave Stevens, Paul, Tim, John & more. Riley graduated from South Kitsap High in 1987 and a few years later he completed his certifications in automotive proficiency in 6 areas at Bates Technical Institute in Tacoma. He worked on large trucks & buses in Tacoma and Seattle, cars at Hazelwood Auto Group and Halls Automotive before moving to Grey Chevrolet in Port Orchard where he worked until the time of his death. Riley’s love of cars began in his teens, working on his own vehicles with his brother and good friends, after school and weekends and never waned. Riley was well known in the Port Orchard area as “one of the best damn car mechanics in town.” Riley married Laura Butler in Tacoma in 1996 and became a step father to 4 beautiful daughters, Joanna, Annette, and Jaclyn & Autumn. A year later his son Riley T. Gibson II was born and quickly became the light of his life. Riley is survived by his significant other, Kathie Buchanan, her 3 daughters Lenaya, Brandi and Ronnie, his son, Riley T. Gibson, his father and step mother, Rick and Pat Gibson, his mom, Dee Marie, his beloved brother Dewey Gibson, his step sisters Sue, Diane and Malinda, step brother Larry, aunts, uncles, cousins, nephews, nieces and many longtime friends who are like family. Riley passed away suddenly and unexpectedly at the home he and his significant other, Kathie Buchanan had just purchased and had moved into the night before, from a massive heart attack November 24, 2019. A Celebration of Riley’s Life will be held at Rill’s Chapel 12/14/2019 at 11 am with a Reception lunch to follow.

Riley Gibson was born June 6, 1969 at Travis Air Force Hospital in California, to parents Rick & Dee Gibson. Riley lived in Virginia & California before moving with his family to Port Orchard in 1977 where he attended Star of the Sea school... View Obituary & Service Information

The family of Riley Thomas Gibson created this Life Tributes page to make it easy to share your memories.