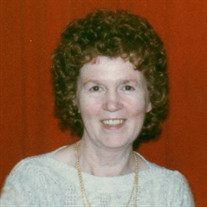 Rita Bernardo was a warm and caring person who would cross the Atlantic from her English home to make a life that would forever touch those who knew her. She passed away on December 11th, 2020 at 89, joining her husband Len in love and spirit. Rita was the daughter of William and Lily (Woods) Burke, born on April 12th, 1931 in Birmingham, England. As a young woman, Rita enjoyed an exhilarating life as a dancer with touring companies that traveled and performed throughout England. She developed a love and appreciation for the arts, and in addition to dance and music, expressed it though her penciled portraits, some of which reflected her experiences on the road. At one of these shows, she attracted the attention of a charming, U.S. serviceman. Rita and Len Bernardo were married on June 6, 1953 and began a life together in the U.S. Rita was a devoted, caring wife and mother who nurtured a warm and loving home by example. She worked hard, perpetually expressing kindness and was always close by to lend a shoulder. As her children grew, she began a successful, part-time career as an independent sales person (“stylist”) for Beeline Fashions, at a time when women, especially for those raising children, didn’t have many opportunities to work outside the home. She later worked in sales at Blanchard’s Department Store in Port Orchard and JCPenney’s in Bremerton. Although some 67 years since her voyage on the Queen Mary to “America”, Rita always maintained her English roots, culture and lovely accent. She lived a life with grace and enjoyed simple pleasures – the colors of a well-tended garden, a plot twist in a good mystery novel, dancing with Len in the living room, a cheerful laugh or pensive sigh from the vault of her many stories of the past and of those she met along the way. Rita is survived by her four children, Linda Brown (Howard), Port Orchard, WA; Joanne Bernardo, Silverdale, WA; Lenny Bernardo (Tracey), Kirkland, WA; and John Bernardo, Long Beach, CA. She was a proud grandmother of four (Michael, Christopher, Ian, Sydney) and great-grandmother of eight. Rita also fondly leaves behind friends she counted as family including at her most recent home, where the dedication, love and care for her will be forever remembered and appreciated. Ceremonies will be private but a live webcast will be shown on this site 1:30pm, Wednesday, December 30th. In lieu of flowers, donations to the Bremerton Sun’s Bellringer fundraiser http://products.kitsapsun.com/bellringer/, would be welcome, “in memory of Rita M. Bernardo”.

Rita Bernardo was a warm and caring person who would cross the Atlantic from her English home to make a life that would forever touch those who knew her. She passed away on December 11th, 2020 at 89, joining her husband Len in love and spirit. Rita... View Obituary & Service Information

The family of Rita Mary Bernardo created this Life Tributes page to make it easy to share your memories.

Rita Bernardo was a warm and caring person who would cross the...