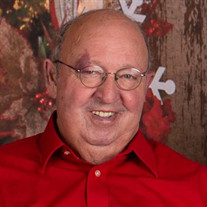 MANCHESTER, 74 years of age, passed on July 27, 2020, peacefully at home. Bob was born to Alfred and Leona Cairns on Dec 22, 1945, and raised in Richland Center, WI. He graduated from the U. of Wisconsin in 1968 with a Bachelor of Science in Geology. He was commissioned as a USAF Officer and served 5 years on active duty and 15 years in the USAF reserves. Having worked his entire 45-year career with the USAF and the US Navy in providing logistical fuels support to all the military services, Bob was known as the consummate “Fuelie.” He used his expertise to manage fuel operations in South Dakota, Canada, Florida, Spain, and Washington State. He holds the distinction of being the only person to supervise the 2 biggest Department of Defense fuel storage facilities that the USAF has in the world and the US Navy has in the continental USA. After retirement, Bob turned his life to continuing to provide “service” to others. He became particularly active in Rotary International, which has the motto “Service above Self.” Bob was able to provide life altering experiences through the pursuit of scholarships and projects supporting people living in such diverse places as Azerbaijan, Rwanda, Uganda, Kenya, and Canada. These people were able to use these life altering experiences to further careers serving others, such as working in the world’s second largest refugee camp in the world that houses over 250,000 refugees. One of the concepts that Bob was particularly proud of was being the implementing force behind locating and installing “sand dams” in Kenya. The construction of 7 sand dams provided water for thousands of people in East Pokot, Kenya. Bob was also proud of introducing a small solar powered computer called a “Raspberry Pi” to over 14 remote schools in East Pokot. Coupled with a computer tablet, the Raspberry Pi brought education to thousands of children in schools with dirt floors and no electricity. Bob was affectionately referred to as the “Grandfather” of Raspberry Pis in other Rotary District 5020 Rotary Clubs. For his dedication to international causes, Bob’s Rotary Club was recognized in the last 2 out of 3 years with the District 5020 International Program Award. Bob’s love of family was best evidenced by his 50-year marriage to his beloved Chris. She was an equal participant in Bob’s adventures with 14 trips to Africa and 38 countries in the world. Together they raised a family of 3 “International Children” with children born in Canada, Florida, and Spain. In addition to Chris, Bob is survived by his brother Richard and his sister Mary, as well as his children: Heidi and her husband, John; Eric and his wife, Mysie; and Ian and his wife, Michelle. His greatest retirement thrill was to spend family time with his 5 grandchildren, Ashley, John, Kailea, Bruce, and Evan. Bob was also proud to be the uncle of numerous nieces and nephews. Bob was an active member of the Manchester County Advisory Committee, the Sons of the American Revolution, the US Navy League, and the Adventure of Faith Church. Bob’s favorite hobby was skiing, and he skied till age 73. In warmer climates, scuba diving was Bob’s outdoor passion. A family gravesite internment ceremony is planned at Tahoma National Cemetery. Once COVID-19 restrictions are lifted, there will be a memorial service at the Adventure of Faith Church at a later date. Bob asked that in lieu of flowers or other gifts anyone wishing to honor his memory donate to the Chris and Bob Cairns Scholarship fund. This fund will be used to provide scholarships to children in Eastern Africa who would not otherwise be able to continue their education beyond primary school. Donations can be made at the following website: https://www.portorchardrotary.org/page/BobandChrisCairnsScholarship.

MANCHESTER, 74 years of age, passed on July 27, 2020, peacefully at home. Bob was born to Alfred and Leona Cairns on Dec 22, 1945, and raised in Richland Center, WI. He graduated from the U. of Wisconsin in 1968 with a Bachelor of Science in... View Obituary & Service Information

The family of Robert "Bob" Cairns created this Life Tributes page to make it easy to share your memories.