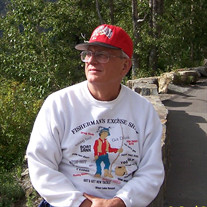 Born and raised in Port Angeles, Bob was the youngest of 4 siblings to parents Will and Marie Gakin. Significantly younger than his siblings, Bob was raised by his single mother after starting his school years. As a child his favorite activities included playing tag on the log booms, camping out with his friends and working his paper route he walked on foot. Although not one for living on the dangerous side, Bob and his friends found thrills in riding the chain that would hook the giant logs and carry them to the crushing blades, ensuring they would jump before meeting the blades themselves. Bob attended Port Angeles High School and had an array of jobs at a gas station and the local newspaper office. During summers Bob worked at Crescent Lake resort chopping wood, stoking the resort fires and splitting shakes for the cabins. After high school Bob hired into the Puget Sound Naval Shipyard as an apprentice in the Machinist shop. There he met Jerry Covey, who quickly became his lifelong friend and mentor during his career at the yard. Two years into his apprenticeship Bob joined the Air Force as a Radar technician. The air force took him to Naselle, Washington for 4 years. While there, Bob quickly met the love of his life, Sharon Gakin. The two met through mutual friends at a picnic and after a few dates, a run in with a corn field after one late night and an accident with a farmer’s deck, they married. Married in Seattle Washington in Sharon’s childhood church, Bob and Sharon stayed in Naselle and had their first child, Sarah. Over the course of 2 years in Naselle, they made money pounding oysters, picking blackberries, and peeling cascara bark to sell. In 1966 Bob and Sharon moved to Port Orchard, Washington. Shortly after having their second child, Andy, Bob returned to the shipyard to finish his apprenticeship and become a Nuclear Technician. Bob, Sharon and their 2 small children lived in a small trailer for the next few years. After moving to various homes around Port Orchard, they had two more children, Lisa and Daniel. In 1979 Bob bought 10 acres in Olalla, Washington. He single handedly designed and build their home and many outbuildings. Making sure to cross his T’s and dot his I’s Bob reinforced the entire house, more than once. Everything but the foundation was Bob's and friends' handy work. As an avid gardener, he added flower beds, 125 roses, a vegetable garden, fruit trees, berries and three small ponds. The strawberry, blueberries and raspberry patch were the children's and grandchildren’s favourite snack place. Bob was a true farmer at heart and had his hand in housing a variety of animals including chickens, pigs, goats, and all of his youngest daughter, Lisa’s, horses. Retiring in 1993, at 53 years old, Bob couldn’t sit very long and took a job at Inland Technology. For fun, he helped build a completely electric car with Billy Knight. Billy would drive short distances until he started carrying a gas generator with him to recharge the batteries. Bob worked outside in the dirt most of the time, gardening or splitting wood for the winter months to heat their farm home. He also enjoyed collecting stamps and his nightly routine of a bath and a good book in his chair. He couldn’t resist a good song and could swing anyone around a dance floor with his quick moves and fancy footwork. Family events always consisted of board games, cribbage or pinnacle if he could persuade someone to learn. In 2012 at a time of crisis, Bob pledged his heart and life to the Lord. He attended a home church pastored by Rick Best. Recently, he highly valued the North Kitsap Baptist Church in Poulsbo, WA, pastored by Terry Tharp. Bob is survived by his wife Sharon Gakin, four children, Sarah, Andy, Lisa and Daniel, 14 Grandchildren and 7 Great Grandchildren.

Born and raised in Port Angeles, Bob was the youngest of 4 siblings to parents Will and Marie Gakin. Significantly younger than his siblings, Bob was raised by his single mother after starting his school years. As a child his favorite activities... View Obituary & Service Information

The family of Robert "Bob" James Gakin created this Life Tributes page to make it easy to share your memories.

Born and raised in Port Angeles, Bob was the youngest of 4 siblings...