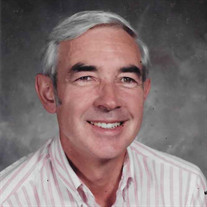 Robert (Bob) John Huebert passed away Thursday, October 10, 2019. He was born on February 12, 1941 in Denver, Colorado to Henry and Anna Huebert. The family moved to Port Orchard in 1943, eventually settling on a 20-acre farm near Long Lake. Bob graduated from South Kitsap High School in 1959. While working at Puget Sound Naval Shipyard, Bob attended Olympic Community College. After obtaining his Associate of Arts degree, Bob transferred to Western Washington State College in Bellingham, graduating in December 1968 with a bachelor’s degree in Education. Bob began his teaching career in Magnolia and at a TGIF gathering, he met his future wife, Dianne. On July 25, 1970, Bob married Dianne Brockliss and they made their first home in Kitsap County. After working at Olympic College for a year, Bob began his 30-year career with South Kitsap School District, teaching Woodshop and Metal Shop at Cedar Heights Junior High. Their daughter, Kim, joined them in 1972 and the following year they moved into the home Bob and his best friend, Dick Raymond built. Daughters Lori and Kristen joined the family in 1974 and 1977. Despite being busy with his family and teaching, Bob enjoyed a wide variety of hobbies: hunting and fishing, woodworking, gardening and cooking. He spent many summers working in Alaska, as well as doing numerous side jobs for family and friends, everything from new roofs, to remodeling and siding houses. Just two weeks after his retirement in 1998, Bob suffered a massive stroke, resulting in paralysis on the right side of his body and leaving him unable to speak. His mind was as sharp as ever and he managed to get his point across through elaborate hand charades and skillful guessing on the part of his audience. Bob enjoyed taking walks, going to the woods with his sons-in-laws, doing puzzles, listening to books on tape, keeping track of the stock market, and enjoying his grandchildren and family get togethers. In July of 2019, Bob was diagnosed with Stage 4 lymphoma. It was his courageous decision not to do chemotherapy so he would have quality time left with his family. On October 9th, knowing his time was near, Bob said goodbye to his family and friends, told them he loved them and went to sleep. He passed quietly and peacefully in his sleep in the early morning of October 10th. Bob is survived by his wife of 49 years, Dianne; daughters, Kim (Luther), Lori (Ryan) and Kristen (Justin); grandchildren, Tyler, Mekenzie (Matt), Megan (Cole), Madison and Sammantha; his sister Kathy Sandness; and numerous nieces, nephews and extended family. Bob is also survived by his lifelong friend, Dick Raymond, whose loyalty and friendship never faltered and meant the world to Bob and his family. Bob was preceded in death by his parents, Henry and Anna and older brother, Hank. A memorial service to honor Bob’s life will be held Saturday, October 26, 2019 at St. Gabriel’s Catholic Church in Port Orchard, 1150 Mitchell Ave SE., at 11:00 am. In lieu of flowers, the family requests that donations be made in Bob’s name to the American Stroke Association.

Robert (Bob) John Huebert passed away Thursday, October 10, 2019. He was born on February 12, 1941 in Denver, Colorado to Henry and Anna Huebert. The family moved to Port Orchard in 1943, eventually settling on a 20-acre farm near... View Obituary & Service Information

The family of Robert "Bob" John Huebert created this Life Tributes page to make it easy to share your memories.