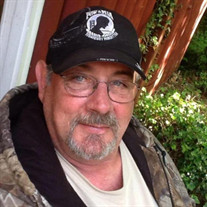 Robert Stephen McLean, “Bob”, longtime resident of Bremerton WA passed away from a cardiac event at his home on October 22, 2020 after a lengthy battle with cancer. Bob was born October 7, 1952. He graduated from North Mason High School in 1970. He then enlisted in the Air Force serving honorably for the next six years. After serving he was employed at the Naval Submarine Base, Bangor as a Plannerman until retiring in 2010. Bob enjoyed hunting in Matlock with his family and friends. He loved collecting old cars and was always on the lookout for the next one. He always wanted to build a garage where he could live and work on his cars. Other hobbies include shrimping on the canal, fishing in Canada, camping with family, and socializing at his favorite bar. His favorite bar, “The Garage Bar and Grill”, was an extension of his home. He called it his kitchen because he hardly ever cooked at home. It was only a mile away from his home so he went there with his sidekick Annie almost every day. They made him feel welcome, like he was part of their family. Bob is survived by his sons Shane (Amy June) McLean of Belfair, Stephen Solene (John Trow-Smith) of London UK, grandsons Justin Solene of Colorado, Gavin Reidt of WA, granddaughter Kennesy Reidt of WA, and his beloved dog Annie. He is also survived by his mother Barbara McLean Clarkston, brothers Michael (Debbie) Mclean of Olympia, Mark (Lynn) McLean of Belfair, Brian McLean of Clarkston, and Terry (Ann) Hendrickson of Vashon Island. Sisters Mary Henningsen of Clarkston, Barbara Jean (Dean) Harkins of Washugal, and Susan (Randy) Martz of Clarkston, and numerous nephews and nieces. He was preceded in death by his daughter Brandalyn Reidt in 2011 and father Neal McLean in 1994. Due to COVID restrictions, a celebration of life will be held at a later date, hopefully in the spring. We will send out an update once we know. We invite anyone who knew Bob to share memories, stories and pictures. A special thanks to his friends for your love and support. You were all very special to him.

Robert Stephen McLean, &#8220;Bob&#8221;, longtime resident of Bremerton WA passed away from a cardiac event at his home on October 22, 2020 after a lengthy battle with cancer. Bob was born October 7, 1952. He graduated from North Mason High... View Obituary & Service Information

The family of Robert Stephen McLean created this Life Tributes page to make it easy to share your memories.