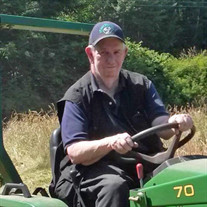 Robert Allen Mygatt was born in Everett, WA on February 27, 1935 to Robert K. and Maude (Savage) Mygatt. He grew up in the family’s cabinet making shop in Stanwood and worked in the shop and at Twin City Foods in his younger days. He graduated from Stanwood High School and shortly afterward enlisted in the United States Air Force from the Reno, Nevada area at the tail end of the Korean War. During his time in the Air Force he became a SERE instructor which is Survival, Evasion, Resistance and Escape. This is intense training that teaches evading capture, survival skills, and the military code of conduct. I know a whole bunch of people that were glad for his skill set and the ability to pass it on to others in an effective way. After his service he returned to the northwest where he worked at the Scott paper mill in Everett and met his future wife, Yvonne. There was just a tiny hiccup in that she was engaged at the time. SERE training comes in handy when you least expect especially the perseverance it teaches you and as he put it; “I quickly put an end to that silliness.” He soon moved on to work at Puget Sound Naval Shipyard as an apprentice which led to his becoming a coppersmith upon graduation. He worked in that trade for some time and then took advantage of an opportunity to become a ship surveyor at Supervisor of Shipbuilding Conversion and Repair (SUPSHIP) Seattle. He was eventually promoted to the position of supervisor of ship surveyors and advanced to GS-12. While at SUPSHIP Seattle he managed countless projects until his retirement. In his young adulthood, Bob became a licensed floatplane pilot. He also taught Chess while he was in the Air Force. The list of accomplishments and technical certifications he had under his belt was to say the least awe inspiring. Some of those items certainly tested his dedication and intellect. Perhaps the greatest accomplishment of all was the ability to balance his demanding career and his family life. He passed up many chances to advance even further because they would have meant uprooting the family from the home and friends they had learned to love. He maintained a long commute for decades just to keep the family on the farm, and still be able to help coach many of the sports teams Mike was on. He managed to come home from a long commute and mentally strenuous routine and still make time to play catch when he could have just taken a well-deserved rest. Bob and Yvonne were active in many of the youth programs that Mike and Michelle participated in. His hobbies were centered around the family and the farm where he kept cows, chickens, rabbits and horses, and put up a huge garden every year. In his down time, he enjoyed reading about history and historical biographies, as well as some military style thrillers. He spent a great deal of time on the family genealogy in his retirement years. Some of the fond memories Mike had were of trips with family and friends to Horseshoe lake where they spend entire days just having fun and making memories. Bob would always chide Mike about his woodworking skills. He would smile shaking his head and muttering something about growing up in the cabinet shop with Uncle Dick and his dad. He was likely having flashbacks of the teasing he got while learning the trade. Bob would tell Mike what a simpleton his dad was when he was young. That all somehow changed when Bob got back from the Air Force as his dad had apparently learned a thing or two and became much wiser in Bob’s absence. All the wisdom and life’s lessons Bob built into his family are now teaching points and fond memories to passed on to the next generation. Bob left this world behind on February 18th, just a few weeks ago and will be greatly missed by those that knew and loved him. He was preceded in death by his wife Yvonne, brother Eugene, father Robert K. Mygatt and mother Maude Mygatt. He is survived by his daughter Michelle; son Mike, and grandchildren Cameron, Devin, and Nicole and sister Dorothy.

Robert Allen Mygatt was born in Everett, WA on February 27, 1935 to Robert K. and Maude (Savage) Mygatt. He grew up in the family&#8217;s cabinet making shop in Stanwood and worked in the shop and at Twin City Foods in his younger days. He... View Obituary & Service Information

The family of Robert Allen Mygatt created this Life Tributes page to make it easy to share your memories.