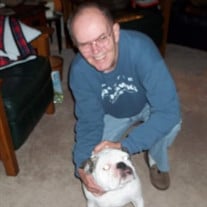 Ronald William Bradshaw, affectionately known as Ron, was the only child of William and Ethel (Christensen) Bradshaw born on July 25, 1939 in Alameda, CA. The family moved within a year to Oakland, where they remained during the build up to and beginning of WWII in September of 1939 and long afterwards. His dad served in the US Navy out of that region. The nation was just beginning to pull out of the effects of the Great Depression when the war started. With that in mind, the pace for his early development was set by the tenacity and creativity of everyone around him. They did not have many of things we count today as necessities. Toys were often things you found laying around and turned them into whatever you wanted them to be. Not to say that his family was poor, but they were used to rationing and sparsity. Television was not in every home and those that had them may have had a 9 to 12-inch screen that may have been round and only offered black and white viewing. There were three stations all of which began and ended the day with the National Anthem. Radio and storytelling were primary forms of entertainment for many families. Telephones were mounted on the wall and you dialed them with a round dial which compared to today took forever. When you picked up the receiver you might have a neighbor talking someone via the party line many were connected to. Microwaves, remote control cars, drones, and other things were not off the chalk board yet. Things were very different but the benefits were that you actually had to be next to someone and carry on a real conversation back in the ‘old days’. There were the Leona Heights Sulphur Mines that had closed in 1934 and he and his friends would explore and play in them for fun. Other things he enjoyed doing while growing up were camping in the mountains with his friends; going on family vacations; and especially being around his grandparents and having family dinners which was a very huge thing during his youth for many families. He obtained an Associates Degree which led to him working for NOAA (National Oceanic and Atmospheric Administration) as a Nautical Topographer. He travelled the world during those years mapping the ocean floors and remapping after shifts occurred to keep things up to date. It was a challenging job at the least, and being in the elements does offer its own kind of beauty and its own kind of horrors as the open waters can become unforgiving with very short notice. His wife Joyce at the time required extra care which led to him leaving NOAA to take care of her. He later worked at a couple of warehouses for the clothing industry. She preceded him in death. Ron began attending the Grief Support group at Christian Life Center in Port Orchard where he met Laura Wetzel. Almost a year after that meeting, they became a couple and were together for a couple of years when they decided to get married on October 3, 2014. Some of his hobbies included boating, fishing, playing cribbage, operating his HAM radio, running model trains, doing yardwork, and gaming at the local casinos once a month. He mostly enjoyed just being at home watching television (with more than three channels) with his wife, Laura. He also enjoyed being at the home of his longtime friend Leon playing Yahtzee or Pai Gow (a form of poker), or conversations over the phone with his other longtime friend Lon. His favorite flowers were red roses and also asters of any color. He was a member of a HAM Radio club, a National Model Railroad Club and a Cribbage Club. Some of his favorite quotes were ’Treat others with respect’ and ‘Don’t judge people”. One of his favorite musicians and singer was Country Gospel artist Alan Jackson He died on February 13th with his wife providing him comfort at their family home. He will be greatly missed by all that knew and loved him. He was preceded in death by his parents Bill and Ethel Bradshaw; wife Joyce; the family dog Alissa and the family cat Mara Kai. He is survived by his loving wife Laura; stepchildren Micah Houghton, Rachel Gilbert, Aaron Houghton, and Bryan Houghton; and his step-grandchildren on his wife’s side.

Ronald William Bradshaw, affectionately known as Ron, was the only child of William and Ethel (Christensen) Bradshaw born on July 25, 1939 in Alameda, CA. The family moved within a year to Oakland, where they remained during the build up to... View Obituary & Service Information

The family of Ronald William Bradshaw created this Life Tributes page to make it easy to share your memories.

Ronald William Bradshaw, affectionately known as Ron, was the...