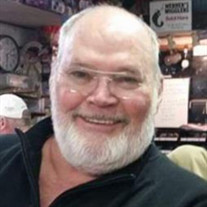 The world lost a giant of a man when Ron McAffee passed away on April 10th, due to congestive heart failure. He was very successful in his career(s) & was known to be an honest & fair man. Ron loved life & he was loved by many friends & family alike. He was born in Heber City Utah, January 28, 1944 & grew up in American Fork UT, graduating from American Fork HS in 1962. Ron joined the Army National Guard in 1962 & went off to basic training & then on to Officers training at Fort Benning GA. Upon returning, he started his working life in a hard rock mine & after being caved on 2 times, with the last one being trapped underground for several hours he decided there was a better way to make a living. In 1968, he moved to WA with his young family, transferring to the WA Army Nat’l Guard & going to work for Boeing. Shortly after in 1970, he was one of the casualties of Boeing’s big lay-offs. He then went to work as a police officer for the Seattle Police Dept. While in the SPD, he & 2 other Officers started the SPD K-9 unit. For 8 years, his partner(s) with the SPD, were named Bosco & Moses. He loved this career & his K-9 partners, but was shot in the line of duty in 1975 & in 1979, he retired from the Dept. He was then called to active duty by the WA Army National Guard when Mt St Helen’s erupted in May of 1980. He was one of the front line coordinators in the clean-up & recovery operation that resulted from the eruption. This started 10 years of active duty, working in Readiness Management at Camp Murray for the WA Army Nat’l Guard Headquarters. He also served on a 6 Mo assignment at the Pentagon. During his Military career, he attended the Army’s Command & General Staff College & earned the rank of Lieutenant Colonial, before his retirement in 1989. In 1990, he became the Deputy Director for Kitsap County’s 911(CENCOM) & Emergency Management Center. A year later he became the Director, leading to his last career. As Director, he lead them through many changes & enhancements to the 911 Automated dispatch system, worked through the separation of Emergency Management, to being its own entity & headed up the construction of a new 911 dispatch & Emergency Management Center. One that the whole county can be proud of. He retired for the last time in 2008 after 18 yrs of service to our Community & its Citizens. Ron’s main enjoyment, outside of work was boating & being with his family & friends. He also enjoyed traveling after his retirement. He belonged to the Retired Seattle Police Officers Association, the Port Orchard Yacht Club & the Port Orchard Rotary. Ron was preceded in death by his parents Erma & Ferris McAffee, sisters, Peggy Ellett & Sandra Nixon, brother, Gary McAffee, & daughters, Heather McAffee & April Brame. He is survived by his wife of 35 yrs, Sharon, daughters Jeniffer McAffee, Gig Harbor & Leila Seevers, Phoenix AZ, sons Charles Schandel, Gig Harbor WA & Jonathan McAffee, Salt Lake City UT & his brother Dennis(Kathy), Midvale UT, 7 grandchildren, Lindsey, Jakob, Austen, Grace, Conner, Zoe & Penny & 2 great-grandchildren, Hudson & Greyson. Because of COVID-19, no service will be held at this time. Arrangements are being made by Rill Chapel & comments can be made at rill.com. In lieu of flowers, memorial may be made to the WA State Law Enforcement “Behind the Badge” Foundation, 8309 165th Ave NE, Ste 205, Redmond WA 98052 or the Port Orchard Yacht Scholarship Fund, P O Box 3, Port Orchard WA 98366.

The world lost a giant of a man when Ron McAffee passed away on April 10th, due to congestive heart failure. He was very successful in his career(s) & was known to be an honest & fair man. Ron loved life & he was loved by many friends & family... View Obituary & Service Information

The family of Ronald Rex McAffee created this Life Tributes page to make it easy to share your memories.

The world lost a giant of a man when Ron McAffee passed away...