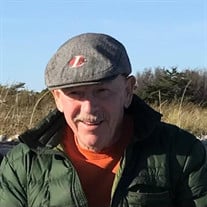 Ronald Tarver, of Port Orchard, WA, passed away on January 29, 2022, at the age of 69. He was born in Seattle on September 27,1953 to William and Dorothy Tarver. He graduated from Thomas Jefferson High School in Federal Way. After graduation, he enlisted in the U.S. Army. On February 24, 1973, while stationed in Monterey California, Ron met Virginia (Jeannie) Santiago Cui at a military dance. It was love at first sight. In April of that year, he asked Jeannie to marry him and a short 6 days later, on April 13, they became husband and wife. Ron and Jeannie were married for 48 years and have two children, Jason, and Bonnie. After fulfilling his duties to the US Army, Ron and Jeannie moved home to Washington. He enrolled in Bates Technical College where he completed a machinist program and an apprenticeship with the Puget Sound Naval Shipyard. Ron went on to work with PSNS until his retirement. Ron loved his family. While his children were growing up, he was actively involved in their activities and volunteered time coaching his son’s baseball teams. Ron loved spending time with his grandchildren, Lucas, Kayla, and Sienna. The grandkids spent several weeks each Summer at his house and went on camping trips that they will never forget. Ron was always generous with his time, opinions, and unusual sense of humor that we all loved. One of the best things about him was listening to him laugh at his own bad jokes. He enjoyed spending time with his dogs, reading, fishing on the lake, his view of Puget Sound and yard art…. lots of yard art. Muscle cars, attending car shows and cruising in his vehicles on nice sunny days were some of his favorites. Ron also loved breakfast, the only meal he truly ever mastered. Breakfast will never be the same without him. We are so grateful for the love, laughs and memories. Ron will be greatly missed and will forever remain near our hearts. Ron is survived by his wife Jeannie; children, Jason (Elizabeth) Tarver and Bonnie (Matt) Shultz; grandchildren, Lucas, Kayla, and Sienna; twin brother, Robert Tarver, sisters Cheryl (Bob) Melchior, Brenda (Jim) Bolton; Marlene Tarver; and his many nieces and nephews. Ron is preceded in death by his mother Dorothy, father William and his brothers Frank and Billy.

Ronald Tarver, of Port Orchard, WA, passed away on January 29, 2022, at the age of 69. He was born in Seattle on September 27,1953 to William and Dorothy Tarver. He graduated from Thomas Jefferson High School in Federal Way. After graduation,... View Obituary & Service Information

The family of Ronald Wayne Tarver created this Life Tributes page to make it easy to share your memories.

Ronald Tarver, of Port Orchard, WA, passed away on January 29,...