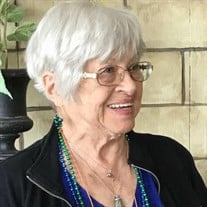 Rosalie Lorraine Atkinson, Port Orchard, died January 4, 2020 at the age of 89. She was a loving and beloved wife, mother, sister, grandmother, aunt and friend to many. Rosalie, called Rosie by her family and friends, is survived by her six... View Obituary & Service Information

The family of Rosalie Lorraine Atkinson created this Life Tributes page to make it easy to share your memories.