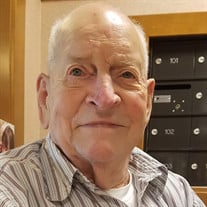 Russell O. Barringer, 95, of Port Orchard, passed away on June 12, 2018. Russell was born in Ruthven, Iowa on May 14th, 1923. He was the fifth of five children born to Leroy and Hallie Barringer. He quit school at a young age to work on the family farm and joined the Army during WW#2. After the Army he discovered Dolores Christine, a cute girl he knew from his hometown Ruthven, Iowa, was now living in Renton, Wa. He looked her up, they dated and were subsequently married in July of 1946 in Renton. They started their married life together with just $150, no car and jobless. In a borrowed a car they moved to Darby Montana to work for his oldest brother. From there he did whatever he could to provide for his family. Always a hard, diligent worker they moved to Cashmere, Wa. to work the apple orchards, then to Port Orchard to work with his dad at a service station and one last move back to Iowa for work before settling near Givens School in Port Orchard with three extra mouths to feed, sons Richard & Denny and daughter Cindy Sue. During the 1950’s and 1960’s he owned and operated Red’s Texaco on Bay Street in Port Orchard. Dolores worked across the street at TB& M grocers as a checker for a few years during that time period. In the late 1960’s he sold the station and went to work for the state highway department. During which time he was recognized with awards and advancement recommendations for his quality workmanship. Prior to retiring he and Dolores studied together and both got their GED. Upon retiring they enjoyed traveling in their motorhome. Russ loved helping others and often mowed the neighbor’s lawn along with his own large lawn. He was a master at fixing mechanical problems with spare parts he had in his extensive collection. When failing health forced Dolores into an assisted living facility he agreed to make a “temporary” move with her to Stafford Suites while she recovered. Unfortunately we lost Dolores ,the love of his life, after 69 years of marriage in 2015. He remained at Stafford Suites until the time of his death. He loved the dedicated staff and wonderful care he received at Stafford Suites and he often said “This is my heaven”. (You can’t ask for a better compliment than that.) The family would like to graciously thank the staff at Stafford Suites for their loving kindness and professional care for both Russ and Dolores. The genuine love and patience prominent in the upper management and passed through the staff makes it truly a home away from home. Russ always enjoyed making people smile so we would like to offer a special thanks to all his fellow residents (especially his dining mates Mike, Eileen, Betty and Grace) whose friendship he cherished and who saw the goodness in his heart and even when subject to his teasing. Russ is survived by three children, 10 grandchildren and 31 great grandchildren. He leaves an invaluable legacy of rarely complaining because, as he would say, “things could always be worse” and his superior work ethics as he believed, “Even when things are slow there is always something that needs to be done”.

Russell O. Barringer, 95, of Port Orchard, passed away on June 12, 2018. Russell was born in Ruthven, Iowa on May 14th, 1923. He was the fifth of five children born to Leroy and Hallie Barringer. He quit school at a young age to work on the... View Obituary & Service Information

The family of Russell Otis Barringer created this Life Tributes page to make it easy to share your memories.

Russell O. Barringer, 95, of Port Orchard, passed away on June...