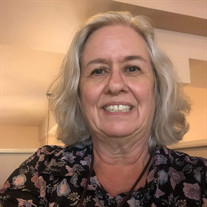 Sharon Lynne Alexander peacefully took the hand of Jesus on October 20, 2019 and received her heavenly healing after a brief battle with Breast Cancer, she was born April 20, 1953 to Stanley and Ruby (Schultz) Morris in Chicoutimi, Quebec. Sharon was raised in Canada and attended Walter Murray Collegiate and was the class of 1971 she had also attended classes at Olympic College. Sharon was also a faithful member of Christian Life Center in Port Orchard where she volunteered with costume making, helping with productions, working in the nursery and volunteering at Cruzin Sunday. Sharon and her twin daughters Rachel and Elizabeth moved to Washington settling in Port Orchard in the early 80’s. Sharon worked as an Administrative Assistant at Art Anderson Associates from 1982-2011 while there she made many lifelong friendships, she also worked at Christa Shores in Silverdale until July 2019. Sharon met Alex Alexander and they married June 25, 1990 with this marriage Sharon gained a son with Jeremiah being added to the family. Sharon loved to crochet, knit and sew and often would hand make gifts for family and friends who were having babies and she would knit preemie hats and donate them to them to St Joe's NICU. Our mom was a true warrior as she had battled cancer in her early 20’s and survived, she often told us she believed with all her heart that God had given her 2 babies at once knowing that she would not be able to have more. When faced with this battle with cancer again she fought it with courage, strength, dignity and faith. Sharon is preceded in death by her father Stanley H. Morris and survived by her husband Alex Alexander family dog Remi, mother Ruby J Morris, brother Bruce (Kristy) Morris, daughters Rachel (Richard) Lamoureux, Elizabeth (Paul) Martin and step-son Jeremiah (Andrea) Alexander. Sharon was loved nana to Erin and Simon Martin, Ethan, Jazmin and Grace Lamoureux, loving Aunt to Angelika Morris, also missing her is her Aunt Joy, Aunt Shirley, Uncle Bruce and many Canadian cousins as well as friends who have become family. Sharon will be missed by her sister-in-law LeShirl Alexander Bergeron (Brandon) and brother-in-law Keith Alexander and her nieces and nephews in Louisiana. A Memorial Service is planned for November 16, 2019 at 11:00 am and will be held at Christian Life Center 1780 Lincoln Ave SE Port Orchard WA 98366.

Sharon Lynne Alexander peacefully took the hand of Jesus on October 20, 2019 and received her heavenly healing after a brief battle with Breast Cancer, she was born April 20, 1953 to Stanley and Ruby (Schultz) Morris in Chicoutimi, Quebec. Sharon... View Obituary & Service Information

The family of Sharon Lynne Alexander created this Life Tributes page to make it easy to share your memories.