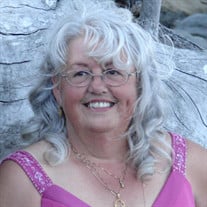 Sharon Lee Ives was born on January 8, 1950 to Claude and Lou Ella Ives in Fairbanks, Alaska - at the time, a very remote area. She was born on her Aunt and Uncles birthday; and also on Elvis&#8217; birthday - for whom she was always &#8216;All... View Obituary & Service Information

The family of Sharon Goodwin created this Life Tributes page to make it easy to share your memories.