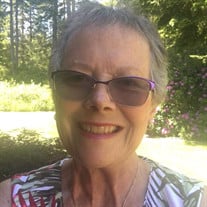 Sharon was born on March 10, 1952 at home in rural Port Orchard, Kitsap County, Washington to parents Ray E. and Joyce E. Sullivan. She passed away peacefully at her home of 32 years in Port Orchard on September 29, 2018 surrounded by her family after fighting a 2 ½ year battle with cancer. Sharon is survived by her husband of 48 ½ years, Clark Ingulsrud, Daughter Lisa Ward (Robert), twin sons Eric Ingulsrud (Heather) and Chris Ingulsrud (Melissa), all of Port Orchard, brothers Ron Sullivan (Susan) from Tucson AZ, and Robert Sullivan from Belfair WA, and eight grandchildren, one great granddaughter, and numerous nieces and nephews. She was preceded in death by an infant son Curt, Sister Peggy Swalander, and her parents Ray and Joyce Sullivan. Sharon attended East Port Orchard Elementary, Marcus Whitman Jr High, and graduated from South Kitsap High School in 1970. Sharon operated a licensed Daycare from 1970-1971, then worked at Puget Sound Naval Shipyard Naval Exchange procurement department through 1972 when she left for the birth of daughter Lisa, and later twin sons Eric and Chris. From 1983 to 1988 she worked in retail sales in Port Orchard and also as a substitute Office Secretary for South Kitsap School District. From 1993 to 1998 she was the Office Manager at Pacific N.W. Screen Printing in Bremerton, WA. From 1998 to 2006 she worked for the Benik Corporation in Silverdale, WA as a Customer Service Representative and Computer Data Entry. The company manufactures neoprene medical supports and athletic supports for many pro Baseball, basketball, and football sports teams. She enjoyed talking to all the customers and teams from all over the US and the world. Sharon retired early to care for her mother in her final years. Sharon enjoyed camping, loved fishing, and enjoyed traveling with Clark in their motorhome, and spending the winter months on their property in Arizona. Sharon was an avid gardener, and the beautiful flowers in her garden made her very happy which she liked to share with her friends. She also loved all animals, but especially her dogs over the years. She and Clark also built a beautiful Koi pond which she filled with over 50 large, colorful Koi, many of which she gave names. Sharon loved all her friends, family and grandchildren, but her great granddaughter held a special place in her heart. Sharon touched many people’s lives with her smile, kind words and caring ways, and we will all have an empty void in our hearts with her loss.

Sharon was born on March 10, 1952 at home in rural Port Orchard, Kitsap County, Washington to parents Ray E. and Joyce E. Sullivan. She passed away peacefully at her home of 32 years in Port Orchard on September 29, 2018 surrounded by her family... View Obituary & Service Information

The family of Sharon Kay Ingulsrud created this Life Tributes page to make it easy to share your memories.