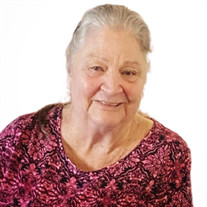 Shirley Elaine (Smith) Hecker, 74, of Kingston, WA passed away on December 23, 2021, at Saint Michaels Hospital in Silverdale, WA. Shirley was born on September 3, 1947, in Los Angeles, CA to Harold & Iris Smith. She spent most of her childhood in California and graduated from Mar Vista High School in Imperial Beach, CA in 1966. As a Navy wife, she moved to Kitsap County where she raised her four children and resided until her untimely passing. She retired from the North Kitsap School District in April 2021, after working many years as a bus driver and most recently as an elementary school custodian. She loved all her co-workers and especially seeing all the kids every day. Her proudest accomplishment though, was raising her four children, Rich, Lucynda, Troy and Tracie. Some of her favorite activities were bragging about her grandchildren and attending their sporting events. She also loved her water aerobics class and all the friends she met at the Poulsbo Athletic Club. Shirley’s legacy as a mother, sister, grandmother, and great grandmother will live on with her children Rich (Lisa) Hecker, Troy (Veronica) Hecker and Tracie (Mark) Tourgee; her grandchildren Andrew and Ryan Hecker, Josh & Kirsty DeWalt, Tiffany Hecker-Saephan, Brittany, Tristan and Troy Jr Hecker and Madison Tourgee; and her great grandchildren, Jaden, Aubree & Elliana. She also is survived by her siblings Penny (Randy) Burns, Harry (Emma) Smith and Jackie (Don) Hilton. She was preceded in death by her parents, Harold & Iris, her daughter, Lucynda (Hecker) Botta and sister Chirlyn We would like to thank the staff at Saint Michaels oncology and radiology as well as the ICU team, Dr. Wu and Dr. Baldwin for their great care. We would also like to thank all her friends and family that helped support her during her treatment, especially her sister, Jackie and good friends Betty, Sue, Rena and Pat. A Celebration of Life will be held at Kiana Lodge, 14976 NE Sandy Hook Rd, Poulsbo, WA on February 27, 2022, at 1:00pm. In lieu of flowers, donations can be made to the Shirley Hecker Memorial Scholarship Fund.

Shirley Elaine (Smith) Hecker, 74, of Kingston, WA passed away on December 23, 2021, at Saint Michaels Hospital in Silverdale, WA. Shirley was born on September 3, 1947, in Los Angeles, CA to Harold & Iris Smith. She spent most of her childhood... View Obituary & Service Information

The family of Shirley Elaine Hecker created this Life Tributes page to make it easy to share your memories.