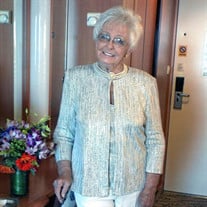 Shirley M. Young, 84, passed away in the early morning of January 16, 2020 with her loving husband by her side. Shirley died of complications from pancreatic cancer. An extremely strong lady, Shirley fought hard to make every moment she had on this earth count and she fought hard until the end. Shirley resided in Port Orchard with her husband Charles “Chuck” Young and their dog Bernie. She was less than one month shy of her 85th birthday, which was to be marked with a party in her honor. Shirley was born February 8, 1935 to Marth Willman and William Guse in Yakima, Washington. Shirley attended West Seattle High School where she graduated in 1953. After high school until about 1958 working at Bon Marche was one of her many jobs. In 1958, Shirley and her girlfriend left the cold of the Pacific Northwest for the warm temperatures of Southern California. She lived in Long Beach, and Whittier before finally settling in San Diego. While in San Diego she was fortunate to work at the beautiful Hotel Del Coronado. It was there, in Coronado, in 1975, that she met the love of her life, Charles Young. On February 17, 1979 Chuck and Shirley were married at MCRD in San Diego. It was a beautiful ceremony with friends and family alike followed by a home after party that is remembered to this day. Two years later began Chuck and Shirley's cruising career began. Beginning in 1979, Chuck and Shirley took cruises annually, and at times twice a year on ships, riverboats and sailboats around the world. From Russia to Italy to Alaska and the Caribbean, Shirley loved to cruise. She loved experiencing the foods and flavors of different countries and cultures. Every cruise was remembered by volumes of photo albums lovingly created by her. Shirley was and will always be remembered as a woman of class. Dress up night on the cruise ships was a highlight, Shirley knew how to dress with taste and with timeless class and elegance. If asked, she would tell you her favorite cruise was a river cruise from Stockholm to Budapest. Shirley and Chuck continued to cruise including a “bucket list” Windstar cruise up until their last cruise in September of last year, 2019. When not cruising, Shirley was considered a “Master Craftsman”. Whether she was knitting, crocheting, sewing or making her own jewelry there was nothing Shirley could not make, fix or repair. While living in San Diego, from 1980-1981, she had her own consignment shop called the “Classy Lady” which was most appropriately named. There wasn't a dress she could not alter or a necklace she could not duplicate by her own hands. In 2001, Shirley and Chuck moved to Port Orchard. Having grown up in Washington, Shirley considered her time here “home.” While in Port Orchard Shirley continued with her jewelry making, sewing, knitting and crocheting. From ear covers for dogs to aprons, ties, bedding, elegant evening dress wraps and more. Her sewing room alone had six different sewing machines with fabric for miles. Her jewelry making took off while in Port Orchard where there wasn't any design of necklace or earring she could not master. Shirley sold some of her creations at “New 2 You” in Port Orchard. Her items there were just the tip of her creative iceberg. Her plethora of beads, pendants, clasps, wires and designs make up a room of their own. Shirley was constantly on the go and when not working on her crafts, she was an avid gardener with one of the greatest of “green thumbs”. Shirley's laugh was infectious, her smile timeless and her love for the important people in her life was highly respected. Shirley lived life every day. She loved life, she loved Chuck and she loved animals. She is survived by her loving husband of just shy of 41 years, Chuck, her brother Bud Burns of West Seattle, her niece and nephew both of Washington and her beloved Havanese Bernie who was always by her side. Shirley leaves behind numerous family and friends and a crafting legacy that will be greatly missed. At her request there will be no service.

Shirley M. Young, 84, passed away in the early morning of January 16, 2020 with her loving husband by her side. Shirley died of complications from pancreatic cancer. An extremely strong lady, Shirley fought hard to make every moment she had... View Obituary & Service Information

The family of Shirley Mae Young created this Life Tributes page to make it easy to share your memories.

Shirley M. Young, 84, passed away in the early morning of January...