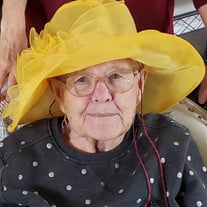 Shirlie JoAnn Dike died May 10, 2022. She was 88 of Manchester. Shirlie was born March 17, 1934 in Eckert Colorado to John and Josephine Doughty. She enjoyed her childhood years in California and on her grandfather’s farm in White, SD. She married Glen Dike in Brookings SD on October 7th 1953, and they relocated to Washington. Shirlie was an active member of the Colby Methodist Church and her church family meant the world to her. She loved and supported UMCOR, the United Methodist Women’s group, Family Kitchen, Bazaar Buddies, and coffee hour at the church. Anything that involved chatting with others she was a big fan of, even if it was during church service. For many years, Shirlie worked for the South Kitsap School District Central Kitchen. She was lunch lady to hundreds and really enjoyed the time she was able to spend with youth. She made us popular with our friends when she worked the ice cream stand after lunch was served. Shirlie had a zest for life and was devoted to many things. Her faith, family, friends and the Seattle Mariners who have yet to make it to the world series. The last game she watched they lost 9-0 and she said, I don’t care, I still like them. A devoted fan to the end. She will be greatly missed. Surviving are her children; Tim Dike (Cheri) of Olympia, daughters Peggy Havill (Mike) of Ocean Shores and Dianna Talmadge of Lakewood. Grandchildren; Lance Talmadge (Amanda) of Lakewood, Jason Saunders (Amy) of Montana, Charissa Saunders of Port Orchard, Glen Dike (Lisa) of Port Orchard. Great Grand Children; Cade, Damien, Sawyer and Dominic. She was preceded in death by her husband Glen, son Marty, grandson Lane, and siblings John and Charlene. Memorial service will be Saturday May 21st at 11:00 am at Colby Methodist Church, 2881 Harvey Ste SE Port Orchard. Masks are required. Donations in her memory can be made to Colby Methodist Church.

Shirlie JoAnn Dike died May 10, 2022. She was 88 of Manchester. Shirlie was born March 17, 1934 in Eckert Colorado to John and Josephine Doughty. She enjoyed her childhood years in California and on her grandfather&#8217;s farm in White, SD.... View Obituary & Service Information

The family of Shirlie JoAnn Dike created this Life Tributes page to make it easy to share your memories.