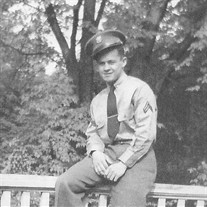 Stanley (Leo) Lewandowski died peacefully on Friday, January 26, 2018 at the age of 96. He is survived by his sisters, Harriett Kamin and Florence Flanagan and his son, Stanley Paul Lewandowski. His wife Lucille, the love of his life, predeceased him in 2013 after 65 years of marriage. Born May 5, 1921 in Chicago, Illinois, and baptized that year at the Church of St. Mary of Perpetual Help. He was one of six children whose mother passed away when he was a child. His Father kept the family together through his childhood and though over time the siblings were separated by miles, they held each other dear. He graduated from High School and joined the military serving twenty years in both the Army and Air Force. In l956 while in the military, he finished his Bachelor of Science Degree at the University of the Philippines. Having served his country admirably he retired from the military in 1961 as a Major. He then went on to a successful career with McDonnell Douglas Corporation in Long Beach California. He retired and moved to Port Orchard twenty years later. He enjoyed the typical father/son past-times with Paul going to car shows and drag races all over California. Upon retirement Stan and Lucille built their dream retirement home in Port Orchard overlooking the sound. They traveled to Hawaii and Europe and made annual pilgrimages to Yuma in the winter in their RV. In Port Orchard Stan sported a power boat on the bay. A doting husband, Stan supported Lucille in all of her endeavors whether it be gardening, trips visiting friends in California and Oregon, weekends at local casinos and, of course, caring for Paul. They were married for 65 years, celebrating their 50th wedding anniversary at St. Gabriel’s church. Always a gentleman and gracious to all he met, he and his wife made many friends during their travels and retirement, Memorial donations to Franciscan Hospice.

Stanley (Leo) Lewandowski died peacefully on Friday, January 26, 2018 at the age of 96. He is survived by his sisters, Harriett Kamin and Florence Flanagan and his son, Stanley Paul Lewandowski. His wife Lucille, the love of his life, predeceased... View Obituary & Service Information

The family of Stanley Leo Lewandowski created this Life Tributes page to make it easy to share your memories.