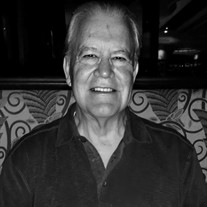 Steven Walter Bartel Manchester, WA October 30th 1944 – March 29th 2020 It is with great sadness that the family of Steven W. Bartel, age 75 of Manchester, WA announces his passing on Sunday March 29th, 2020 at home surrounded by his loving family. Steve died of acute myeloid Leukemia, due to exposure of Agent Orange while serving in Vietnam. He was the beloved husband and best friend of 46 years to JB Bartel. Steve was born in Seattle, WA and grew up in Las Vegas, NV. He was the loving son of Harry and Mary Bartel. Steve met his wife at Northern Arizona University, Flagstaff, AZ, and graduated from Evergreen State College in Olympia later in life. Steve served with honor as a Seabee in the US Navy and served 2 tours in Vietnam at DaNang and Red Beach. After serving in the Navy, Steve worked for the US Postal Service for 30 years as a letter carrier in Eugene, OR and Port Orchard, WA. Something special Steve did was feeding and watching the birds, and tending to his yard, which gave him great pleasure. He loved his cats, Miami and Bahama, who stayed by his side until the very end. He also loved RV family trips with his wife and his granddaughters, as well as his traveling throughout Europe. Steve left a legacy of his loving soul, kindness, and gentle manner that will always be remembered. Steve was well-loved and respected by his many friends and family. His extraordinary sense of humor was mostly appreciated by his granddaughter, Kaley-Lynn, she understood it. He is survived by his loving wife JB Bartel, daughter Kathleen Bartel-Brocksome, granddaughters Kaley-Lynn and Katrina Brocksome of Bremerton, WA. Jeffery Bartel and grandchildren, Jessica, Kenzie, Kiara, and Kyuss Bartel of Seattle, WA. We will be missing one less living angel among us. He was a very good man! A celebration of life will be held at a later date.

The family of Steven Walter Bartel created this Life Tributes page to make it easy to share your memories.