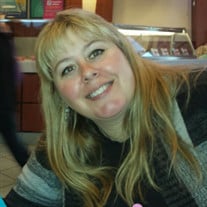 Tanya Alicia Morris (Denniston), age 50 of Manchester, WA, passed away suddenly on June 2, 2020 with her loving husband by her side at St. Anthony’s Hospital in Gig Harbor after fighting a 4 year battle with breast cancer. Tanya is survived by her husband, Mike; her children, Nick and Carley; her grandchildren, Jamesen and Kason; her father, David; her sisters, Leslie and Jennifer, as well as numerous nieces, nephews, cousins and other extended family. Tanya is preceded in death by her mother, Linda. Tanya was born on April 16, 1970 in Seattle, WA to David and Linda (Palmer) Denniston. She attended elementary and middle school in Federal Way before graduating from Enumclaw High School in 1988. She completed post-secondary education in cosmetology and worked as a cosmetologist for nearly 30 years. On July 18, 1998, Tanya married Mike Morris and began the favorite part of her life. There was never a person more suited and more enthusiastic about being a wife and a mother. Tanya was delighted to raise two beautiful children and excited to help nurture two grandchildren. Her children and grandchildren were the light of her life and the biggest regret she had knowing cancer would take her too soon was that she wouldn’t get to see her grandchildren grow up. However, she took full advantage of spending time with the kids at the Manchester family home on the beach and fishing on the dock, even when the cancer was making life more difficult. She was one of the strongest, kindest, nicest people you will ever meet. She had the biggest heart and welcomed anyone and everyone into her life. Tanya was a devoted mother and an avid gardener. She relished being out in the yard and cultivating her plants, as much as she enjoyed cultivating her children and grandchildren. Throughout the years she took pleasure in watching her kids compete in their various sporting activities; Carley competing in horse shows all over the region and Nick’s countless early morning wrestling tournaments. More recently she was in attendance at Jamesen’s tee-ball games and was his loudest cheerleader. Tanya had a penchant for playing cards and board games with family and friends. There were numerous evenings sitting around a table playing Liverpool Rummy. Tanya was also a hardcore Seattle Seahawks and Seattle Mariners fan. Her favorite players were Bobby Wagner and Edgar Martinez. Tanya will be deeply missed by her family, friends and all who knew her. A celebration of life is being planned for late summer in Manchester, WA. In lieu of flowers, memorial contributions can be made via a GoFundMe (https://gf.me/u/x7qvgv) page set up to collate donations toward a 529 plan for Jamesen and Kason’s future educational costs or to Seattle Cancer Care Alliance toward breast cancer research. Condolences may be shared at www.rill.com/obituaries/

Tanya Alicia Morris (Denniston), age 50 of Manchester, WA, passed away suddenly on June 2, 2020 with her loving husband by her side at St. Anthony&#8217;s Hospital in Gig Harbor after fighting a 4 year battle with breast cancer. Tanya is survived... View Obituary & Service Information

The family of Tanya Alicia Morris created this Life Tributes page to make it easy to share your memories.